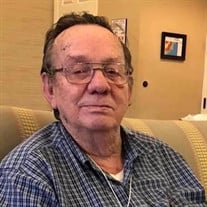 Max Earl Adkisson, of Longview, passed away on Friday December 31, 2021. Max was born September 19,1935 to Robert and Myrtle Adkisson. Max served in the US Navy on the USS Marshall as a radioman from October 1953 to November 1957. Upon returning home from his military service, he married Helen Jones on November 23,1957. They were married for 54 years. Max and Helen had three children-Pamela Adkisson, Mark Adkisson and Janet Adkisson Bagley. Max moved his family to Longview in 1966 to go to work for the Joseph Schlitz Brewery. He started as a lab tech and advanced to being over the Lab and the Quality Control department. He retired from Stroh’s(formerly Schlitz) in 1994. He spent the last part of his life being the main caregiver for Pamela and Helen as they each battled cancer. Max has called Heartis Assisted Living his home for the last 4 years where he was known for his love of books, witty sense of humour and playing dominoes with his special group of “ his domino Ladies” Max was preceded in death by his parents Robert and Myrtle Adkisson, wife Helen Adkisson, daughter Pamela Adkisson, siblings-Robert G. Adkisson, Margaret Campbell, Mary Harber, Hazel Landernaux, Bobby Adkisson, and lifelong friend Annabelle Morgan. Max is survived by his son Mark Adkisson and wife Carmela Davis and daughter Janet Adkisson Bagley and husband David Bagley. He is also survived by 9 grandchildren. Mark and Carmela’s children are Kyle Adkisson, Kent Adkisson, Mary Marget Jones and husband Jon, Adrian Tarpley, Stephan Tarpley and his wife Abigail, Kenton Goodman and Trevon Goodman and wife Madison. Janet and David’s children are Paige Bagley and Erin Bagley. Max also had 4 great grandchildren. Special Thanks to the staff of Heartis Assisted Living Facility for their love and care of Max over the last 4 years. The family would also like to thank the Nurses and staff of Alinea Hospice for their care of Max this last month. The family request that in remembrance of Max that you make a donation to a charity of our choice or to the Alzheimer’s Association. Visitation and Services to be held on January 4, 2022 at 10 am at Rosewood Mausoleum , 1944 FM 1844, Longview, Texas 75605.

Max Earl Adkisson, of Longview, passed away on Friday December 31, 2021. Max was born September 19,1935 to Robert and Myrtle Adkisson. Max served in the US Navy on the USS Marshall as a radioman from October 1953 to November 1957. Upon returning... View Obituary & Service Information

The family of Max Adkisson created this Life Tributes page to make it easy to share your memories.

Max Earl Adkisson, of Longview, passed away on Friday December...

Send flowers to the Adkisson family.