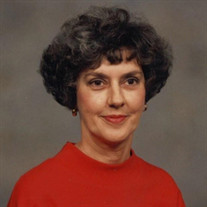 Mary Ann Tosh Nichols was born August 21, 1937, in Rusk, Texas and died peacefully on December 4, 2021. She was the third of four children born to Leo Waters and Leona Maude “Honey” Fulgham Tosh. She graduated from Rusk High School in 1955 and continued her education at the University of Texas at Austin until 1957. She married in July 1957 and joyfully welcomed the birth of her two sons in 1961 and 1963. She and her family moved to Longview in December 1970. After many years of being a homemaker, she returned to school and graduated from the University of Texas at Tyler with a degree in business administration with a major in accounting. She began her career as a certified public accountant in 1992 and retired in 2007. Her career was quite rewarding to her, but her most favorite job was always that of being a grandmother. She was a member of First United Methodist Church of Longview. She was loved by many! She was preceded in death by her parents, two brothers, one sister-in-law, and her special friend, Rex A. Nichols, Sr. Beloved survivors include her sons, Rex Alton Nichols, Jr. and wife Kimberly, and Mark Tosh Nichols; grandchildren, Lauren Ashley Pipak and husband Stephen Edward Pipak, Jr., Luke Aaron Nichols and Mitchell Riley Nichols, Hunter Head, Samantha and Shelby Walker, great-grandchildren, Owen Vaughn Pipak and Olivia Valerie Pipak, brother and sister-in-law, William Edward and Sheryl Tosh of Rusk; several nieces and nephews; and her good friend Susan Valerie Watson. The family will conduct a private celebration in her honor. In lieu of flowers, memorial contributions may be made to Newgate Mission, 207 S. Mobberly Ave., Longview, Texas 75602, first United Methodist Church, or Alzheimer’s Association, act.alz.org.

The family of Mary Ann Tosh Nichols created this Life Tributes page to make it easy to share your memories.

Send flowers to the Nichols family.