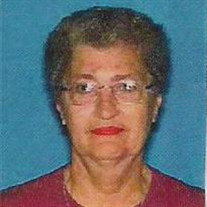 Mary Gail Martin Price passed away in Tyler at the age of 76 on Saturday, February 16, 2013. She was born in Retreat, TX on August 16, 1936. Mary spent her childhood in Retreat where her family and ancestors have lived since the 1840's. For most of her childhood, she played outside with her brother doing all the things that country kids did at that time. From early on, Mary exhibited exceptional skill in anything athletic. She could kick or throw a football further, hit a baseball harder, ride a horse faster than any of her mostly male playmates. She also won many marble games that were played with a circle drawn in the dirt. Her mother, as many mothers did in that day, made both she and her brother a little drawstring bags to carry their marbles around in the pockets of their overalls. Mary attended Pickett School for the first three years of elementary school. In 1946, the Pickett School consolidated with the Corsicana I.S.D. and she completed her education there, graduating from Corsicana High School in 1954. Because, at that time, the Corsicana schools did not have an athletic program for girls, Mary played the short-stop position on the girls' softball team for both the Pursley and Richland communities for several summers. Shortly after high school graduation, she went to work as a legal secretary for two young lawyers who were just getting their practice started in Corsicana. They were Buck Douglas and Robert Jackson. In the early 60's, Mary moved with her family to the Bakersfield area of California where her husband was in both the automobile and the trucking business. They returned to Texas in 1977. She went to work as the Administrative Assistant to the Chief of Police at the University of Texas Health Science Center at Tyler. She worked there until she retired. Mary had bought a home located on the grounds of the Gladewater Country Club. You could step out of her front door and you were immediately on the golf course. She played golf there for a number of years and after retirement played on a daily basis as weather permitted. If she wasn't playing golf, she was watching it on TV. She had said once that she would have become a golf pro had she taken up the game earlier in life. We are all grateful that she had an opportunity to truly enjoy her retirement years doing what she loved to do. Preceding her in death were her parents, John Thomas Martin Sr. and Gracie Lee Martin Hollingsworth, as well as her brother, John Thomas Martin Jr. She leaves to cherish her memory, her daughter and son-in-law, Joni Gail and John Wood of Longview; her son, Dave Price of Longview; grandchildren, Audra and Lyle Myers of The Colony and Cody Stillwell of Longview; two great-grandchildren, Kennedy and Christian Myers of The Colony. Other survivors include the father of her children, David Price of Highland Village, TX; one sister, Polly Martin Thomas of Retreat, one sister-in-law, Carly Martin of Shreveport, LA, and a very special friend, Willie Ward of Gladewater. Nieces, nephews, relatives and friends also remain to remember her. The family will gather at the Retreat City Hall for visitation and lunch at noon on Wednesday, February 20, preceding a graveside service conducted by Bro. Bill Honea at 2:00 p..m. at the Hamilton-Beeman Cemetery in Retreat. All friends and family members are invited to join us there for a time of remembering Mary and honoring her life. We, as a family, express our thanks to all who made Mary's life more complete in any way. We are grateful for your friendship and pray God bless you everyone.

Mary Gail Martin Price passed away in Tyler at the age of 76 on Saturday, February 16, 2013. She was born in Retreat, TX on August 16, 1936. Mary spent her childhood in Retreat where her family and ancestors have lived since the 1840's. For... View Obituary & Service Information

The family of Mary Martin Price created this Life Tributes page to make it easy to share your memories.

Mary Gail Martin Price passed away in Tyler at the age of 76...

Send flowers to the Price family.