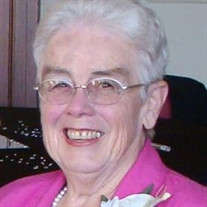 Mary Janet Fort Lanagan, 84, died March 12, 2017 at her lakeside home in Lone Star. Born May 25, 1932 in Waco to Foster and Jean Curnutt Fort, she lived brieﬂy in Texarkana where she was a private school classmate to H. Ross Perot. She moved to Longview in 1939 where her father opened a photo studio on Hughes street. She was sitting on the front steps there in 1942 when her future husband, John Mayo Lanagan, came to sit for a 12th birthday portrait. Mayo and Mary did not meet again until Junior High School. A brilliant student, she had been moved up two grades, allowing them to graduate into high school together on D Day, June 6, 1944. They were friends and companions throughout school, but were separated when she was deemed too young at 15 to enter college. They reunited in 1950 to begin a 67 year long marriage that produced four children. Judith Lynn, 1951; David Mayo, 1952; Elizabeth Shawn, 1954; and John Matthew, 1955. Active in their community, they were “parents to many” in the Methodist Churches of Lone Star and Daingerﬁeld, as well as the Girl and Boy Scout organizations, Band Parents and school supporters at Daingerfield- Lone Star high school. With children entering college, Mary also went back to school. Her ETSU professors urged her to get the additional credits which would qualify her to teach college level biology, but she elected to pursue medical technology, working many years in area hospitals and clinics. They shared a lifelong passion for books and music and when retired spent weeks in England, Scotland, Wales and Ireland, Canada, Alaska and Mexico enjoying great museums and different cultures. In later years, they enjoyed six Caribbean cruises. John Mayo, with assistance from their children, chieﬂy Shawn, gently and lovingly cared for her during her last challenges of Leukemia and Alzheimer’s disease. Mary was preceded in death by her brothers, Foster W. Fort and Walter Lee Fort; her sister, Saundra Lloyd, and by one great grandson, Xander McMurrian. Those left to cherish her memory are her husband, John Mayo Lanagan of Lone Star; her children and their spouses, Judy and Dan McMurrian, David Lanagan and Angela McCain, MD, Shawn and David Snyder, and Matthew and Beth Lanagan; two brothers, Arthur Fort and Gene Fort; her grandchildren Daniel McMurrian, Braden McMurrian, Megan McMurrian, Leslie Lanagan, Lindsay Zeis, Kelly Sole, Caitlin McMenemy, Jason Horn, Jonathan Horn, Dr. Chasity Henderson, and Christy Henderson; 16 great grandchildren; numerous nieces, nephews and cousins; and her faithful canine boss, “Harry Putter”. The family is deeply grateful for the skills, compassion and care from her doctors, Dr. R.J. Sansom, Dr. Rodney Slone, and Dr. Lewis Duncan; Longview Cancer Center, Good Shepherd Home Health Care, and Heart’sWay Hospice during the last stages of her illness. Graveside services will be held at 10 AM Wednesday, March 15, 2017 at Rosewood Park Mausoleum under the direction of Rader Funeral Home of Longview. The family will receive friends Tuesday evening from 5-7 PM at the funeral home. Donations may be made to Heart's Way Hospice of Northeast Texas,4351 McCann Rd, Longview, TX 75605 or the HiWay 80 Rescue Mission, 3117 W. Marshall Ave. Longview, Texas 75604. A memorial guestbook may be signed online at www.raderfh.com.

Mary Janet Fort Lanagan, 84, died March 12, 2017 at her lakeside home in Lone Star. Born May 25, 1932 in Waco to Foster and Jean Curnutt Fort, she lived brie&#64258;y in Texarkana where she was a private school classmate to H. Ross Perot. She... View Obituary & Service Information

The family of Mary Janet Lanagan created this Life Tributes page to make it easy to share your memories.

Send flowers to the Lanagan family.