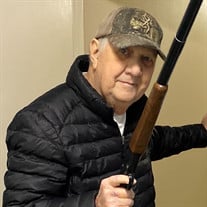 Marvin “Wayne” Hartt, 78 year old resident of Longview, Texas passed away December 1, 2021. He was born on July 25, 1943 to Smith Ivan and Nathalee (Bird) Hartt in Reed’s mountain near Mt Enterprise, Texas. Wayne was an accountant by profession but loved to research law and dabble into "computer nerd” land. His main passion was his family and at the top of his adoration was his teenage heart throb Charlotte Henry Hartt. They were married on October 5, 1963. They moved to Longview, Texas where he started to work at Letourneau and he met and became lifelong friends with David Williams and John Challis. These 3 buddies were quite the ’trouble’ when together and could be found on a deer lease or local ‘fishing hole’ pretty much any day of the week. Wayne’s favorite time of year was Christmas, and when December would roll around, he would say “let’s just open ONE present!”. We could always tell which present was from him because he loved wrapping them “tootsie roll” style (twisted on each end). His favorite ‘trick’ at Christmas was to hide one of his presents so he could be the one to open the ‘last present’, His sneakiness caught on to many of the other family members to see who would ‘win’ the ‘last present’ each year. Wayne never seemed to meet a stranger. His bright blue eyes would draw you in and feel like you were the only one in the room and the stories he could tell, always captivating - even if some were just a little mixed and matched to make them just a tad more interesting. When one of us would come home after being away for some time, he would always try to catch the first glimpse of us coming through the front door and say “I saw her first!”. We thought about that the other day: him stepping into heaven and seeing his mom after 20+ years and saying “I saw her first!”, but then Judy, his sister, most likely replied, “nope, I saw her first, but welcome home!” He also loved to talk about Jeeps and do a little mudding at the deer lease. Over the past year, he would enjoy ‘ducking’ cool jeeps around town. You could also find Wayne wearing different types of camouflage, from just a simple ‘hog hunter’ hat, or mossy oak t-shirt, to a full on camo body gear. Camo'd up and heading to or from “the woods”. To help celebrate his love for exploration and being outdoors, we encourage everyone who joins us at the graveside service to wear some type of camouflage. Wayne is survived by his wife Charlotte; daughters, Shelly Chase and Kim Rhodes; ‘like a son’ Hugh Chase and David Rhodes; granddaughter, Mackenzie Rhodes; and grandsons, Mason Chase and Hunter Rhodes; precious great granddaughter Ivee Rhodes; brother-in-law, Tony Bumpus; nephews Jeff and Brian Bumpus and their families; and cousins (like brothers) Jesse and Dennis James. He was preceded in death by his mother (and best ‘Grandmother’) Nathalee Hartt and sister Judy Bumpus and cousin Ken James, plus many other loved ones too great to list. Wayne was a real hero to his family and he will be truly missed. We just are so thankful to have had him in our lives. We love you daddy/poppy/pops and miss you so much. Graveside service is on Saturday at 2pm, December 5, 2021 at Shiloh cemetery CR 3131 and SH 315 in Mt Enterprise, TX 75681.

The family of Marvin "Wayne" Hartt created this Life Tributes page to make it easy to share your memories.

Send flowers to the Hartt family.