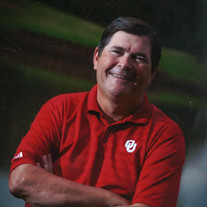 Mark Lynn Eitelman was born June 1 1955 to Robert E. “Bob” and DeAlva Eitelman in Longview, Texas. Mark was surrounded by his family when he went to be with his Lord on Friday, November 3, 2017. Mark and his family lived in Marshall, Jacksonville, Victoria, and settled in Longview. He graduated from Pine Tree High School class of 1973; and remained lifelong friends at Pine Tree and treasured their friendships. He served as V.P. secretary, and treasurer in the JayCee’s, played in a traveling softball league, Church Co-rec Softball, and coached ladies softball. Years later he was proud to coach his two sons in little league baseball. Mark and Cheryl were married June 6, 1992 and blended their family with Rob Carrie, Aaron and Trent. They attended Greggton United Methodist Church where Mark served on the Finance Committee, Pastor Parrish Committee, and Class President for Open Circle Class for numerous years. Mark was passionate about many things including golf, music and if you knew Mark or talked to him for any length of time, he bled Crimson and Cream, Boomer Sooner. avid OU fan and traveled to many OU games; and had a great love of the Dallas Cowboys. He was also deeply proud of his Native American “Choctaw” Heritage. One of his greatest joys was an introduction to his love of OU to his daughter, Carrie. They shared this passion and attended many events together. Mark’s passion for the outdoors was instilled with his boys from an early age. Bird hunting, 4-wheeling, and golf were all activities that will remain cherished memories. Mark was a quick wit and had a ready arsenal of jokes. He could easily find humor in all situations. He was also a “music trivia genius”. Mark’s dad, Bob Eitelman, taught him from an early age the importance of a strong work ethic. He worked diligently for many years in the field of industrial sales. From that experience base, it culminated to his dream of purchasing and owning his own business “Sun Rubber Supply”. Mark was diagnosed in 2012 with ALS. Through his fight with ALS he continued to show courage by traveling to the Methodist Hospital in Houston for many years to help further research. After diagnosis, Mark’s prayer to God was “What do you want me to do with this?” He believed his answer was to show his family and others faith, courage, strength, and humor. The PT‘73 Foundation was instrumental in showing their prayers, love, and support for his battle with ALS. Mark was blessed with the love and care of his Caregivers which included Adela, Atoya, Melissa and Hospice nurses Allison, Stephanie and Cora Mark was preceded in death by his father, Robert E. “Bob” Eitelman. He is survived by his loving wife, Cheryl and their children Rob Eitelman, Carrie Eitelman, Aaron Bussey, and Trent Bussey; his mother DeAlva Eitelman; brother Steve and sister-in-law Karen Eitelman; sister LaNell Barnard; nephews Gene Eitelman and his wife Martha and Dane Eitelman and his wife Jennifer; Evan and Audrey Barnard of SC; and Aaron Barnard of FL; his father-in-law Bernie and Martha Tatum; sister and brother in la Kyle and Vicki Couser: niece Kailey. A funeral service will be held at the Greggton United Methodist Church on Tuesday, November 7 beginning at 2pm. A visitation will be held an hour prior to the service. A private graveside service will be held following the funeral for family. In lieu of flowers, memorials to Greggton United Methodist Church and The PT’73 Foundation PO Box 3142, Longview TX 75606.

Mark Lynn Eitelman was born June 1 1955 to Robert E. &#8220;Bob&#8221; and DeAlva Eitelman in Longview, Texas. Mark was surrounded by his family when he went to be with his Lord on Friday, November 3, 2017. Mark and his family lived in Marshall,... View Obituary & Service Information

The family of Mark Lynn Eitelman created this Life Tributes page to make it easy to share your memories.

Send flowers to the Eitelman family.