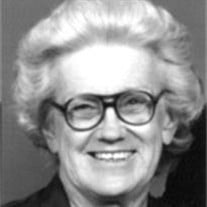 Marie Ogilvie passed away May 30, 2013, in her home near Gilmer, Texas, at the age of 90. Marie Ogilvie was born May 26, 1923, in the ranching community of Ironside, Oregon, to Ed and Nanny Oakes. She is survived by her husband of 64 years, Marvin Ogilvie. She is also survived by children, Janice Ogilvie of Gilmer, Texas, Dean and Vickie Ogilvie of Longview, Texas, Bruce and Nanci Ogilvie of Union Grove, Texas, and Cindi and Dan Muff of Bastrop, Texas. Her grandchildren are Lena Breaux, Jody Ogilvie, Todd Ogilvie, Kevin and Jessica Ogilvie, Angie and Keith Williams, Landon and Jennifer Ogilvie and Haley Muff. She is also survived by her brother, Donald Oakes and Ileana Oakes; and 12 great-grandchildren. Marie was hardworking and industrious even in early childhood, earning precious pennies during the depression by killing mice in her parents' barn for a half cent a tail. She was an exemplary student even though she attended a community school with all grades in one room at Ironside with her mother as the teacher. She graduated from Drake University, Des Moines, Iowa, with a B.A. in music and later received a M.S. in education from Eastern Oregon State University. Drake is where she and her brother, Donald, met Darwin Gant, her first husband, whose, plane was lost in route to England in 1944 just before the war ended due to mechanical failure. She later met Marvin Ogilvie, a friend of Donald's at Drake. They married in 1948 and lived and worked on the family ranch in Ironside. Marie taught elementary school from 1950 to 1961 in Ontario, Oregon. She taught piano lessons to many students over a 25 year period, some at no charge if money was an issue. After 1962, she devoted her life and career to cattle ranching with Marvin. Marvin and Marie ranched in Ironside until 1964 when they purchased The Crown Ranch in John Day, Oregon, consisting of owned and leased land of 52, 000 acres. In 1968, the Ogilvie family moved to Texas, buying a 10, 000 acre ranch in Red River County, bringing The Crown Ranch brand from John Day, Oregon. They raised cattle and kids in the most wholesome of environments. There was never an excuse for missing church. In 1973, they traded for two other ranches also using the Crown brand. Eventually they gave up their passion, ranching, when the beef market crashed in 1975 and traded 1100 acres for a motel in Terrell, Texas. They operated that until 1979 when they moved to Longview. Marvin became a realtor and Marie started working at H&R Block, where she was promoted to office manager in her first tax season. They also owned and operated a skating rink, rental properties and a small poultry operation. She was a member of Delta Zeta Sorority, American Association of University Women, Eastern Oregon Community Chorus, American Businesswomen Association, Oregon Farm Bureau, Texas Farm Bureau and a charter member of Holy Trinity in Longview. She volunteered as pianist, organist and Sunday school teacher at her churches in Oregon and Texas. Marie was a trailblazer in many ways: entrepreneur, shrewd businesswoman, teacher, leader and thinker. She and Marvin constructed a partially underground energy efficient 4800 square foot home in 1980. She was never timid, going toe to toe with businessmen and bankers making the best deal for her family and business interests. Marie instilled in her children the importance of putting God first, hard work, frugality and hope. She believed in every member of her family's limitless potential. She was the never failing cheerleader for all of us. She loved the Lord, her family, music, her pets and her beloved Ironside Mountain. In lieu of flowers, donations may be made to Holy Trinity Church, 3800 Judson Road, Longview, TX 75605. Viewing and visitation will be 6-8 p.m. Sunday evening, June 2, 2013, at Rader Funeral Home, 1617 Judson Road, Longview, Texas. Funeral services will be 2 p.m. Monday, June 3, 2013, at Holy Trinity Church.

Marie Ogilvie passed away May 30, 2013, in her home near Gilmer, Texas, at the age of 90. Marie Ogilvie was born May 26, 1923, in the ranching community of Ironside, Oregon, to Ed and Nanny Oakes. She is survived by her husband of 64 years,... View Obituary & Service Information

The family of Marie Ogilvie created this Life Tributes page to make it easy to share your memories.

Send flowers to the Ogilvie family.