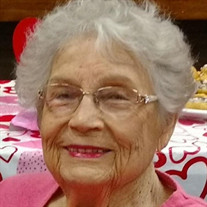 Marie S. Ballard, 91, entered into eternal rest on October 5, 2021, in Longview, Texas. Sheltered in her Lord’s arms now set free from the ravages of pain and confusion, she was reunited with her best friend and beloved daughter, Sheila Ballard Rainer of Longview, son, Michael and husband, Bill of Houston, Texas. Marie was also greeted in heaven by her loved ones from Oklahoma, Parents, Dovie and Claburn Smithee, brother, Dee Smithee, sister-in-law, Dell Smithee, brothers-in-law, Bill Tanner and Pierre Hurd, nephew, Kenny Smithee and Ann Smithee. Her Ballard family which preceded her included her in laws, June and Johnnie Ballard, Zwake Ballard of Oklahoma, brother and sister-in-law June and Elaine Ballard, nephew, Bruce Ballard, nephew-in-law, Paul Dryden all of Charlotte, North Carolina, and her son-in-law’s father, Jim Rainer of Louisiana. To know Marie was to know a true friend. She was a fabulous cook, rarely used a recipe and a pie or cobbler without a homemade crust was unthinkable! Marie loved to garden, and her flowers and vegetables were spectacular. She was a saavy shopper with a passion for stylish, vogue clothing, shoes and of course…jewelry! A hand without three rings was underdressed! Growing up in Oklahoma around a large extended family on a working farm of cattle, rolling hay meadows, orchards and gardens was a joyful existence for her as a young girl. She excelled in school and attended Business College on an academic scholarship. Marie came to know the Lord as her Savior at Morse Baptist Church in Okemah, Oklahoma where she would also marry her future husband, Bill Ballard. As Bill built a successful business in the oil and gas industry x-raying pipelines, they would travel all over the United States. Finally settling in Houston, Texas in the 1960’s. Marie attended First Baptist Church. A little over 30 years ago after losing her husband, Bill, Marie relocated from Houston to be near her daughter Sheila and family in Longview, Texas. In Longview she attended Mobberly Baptist Church where she made many wonderful friends through her active Seniors Sunday School class and fellowships. Marie was also an active member of the Green Street Garden Club where she had fun times and good friends. Marie’s surviving family in Oklahoma are her beloved sister, Lois Tanner, favorite cousin, Helen Rose Ashley, nephew, Bill Tanner and wife, Debbie, their son, Billy Tanner, nieces, Marilyn Smithee and Carolyn and Bobby Holder. She is further survived by her cousin, Starlene Lemons of Riverside, CA. Her very special and thoughtful niece of Charlotte, North Carolina also survives her, Deborah Ballard Dryden. In Longview she is immediately survived by her grandson, Tyler (Sarah) Rainer, great grandchildren, Greyson and Adeline Rainer. Marie’s in law and close friend Edie Rainer survives her as well along with her devoted, loving son-in-law, Greg Rainer. Marie leaves behind wonderful and caring neighbors that saw her through dark days, often being her knight in shining armor, Patty and Frankie, Kevin and Kellie, Gloria and Tom, Margie L., to name a few. It was also in her lowest times that her Mobberly family and minister, Scott Schulik would comfort her over the tragic death in 2017 of her son, Mike, and beloved daughter Sheila in 2019. As her health declined after these events, it is with warmest thanks that her family expresses their love to her sitter Brenda Jeffrey, nursing staff and aides with Compass Hospice, Beverly, Carrie, Amber, Amy, Bri and Courtney. Also, much gratitude is extended to the staff at HavenCare Nursing facility for their attention to Marie in these final weeks. Though her last several years brought tragic loss, and severely declining health issues, they don’t overshadow Marie's often flamboyant, eccentric life, her travels, and “adventures” throughout the world, any one of which is a story unto itself. In the last 2 and half years of her life it would be her son-in-law Greg she would grow so close to and rely upon. She would tell him quite often, “Greg, you must promise me to write a book about all of this, no one will ever believe all these stories really happened, and don’t make up a fake name for me…if I did it I want them to know is was “Marie.” Memorial services will be 2 pm Saturday, October 9, 2021 in the Chapel of Rader Funeral Home with Rev. Scott Schulik officiating. Private family burial will be at Rosewood Park where she will be laid to rest beside her Beloved Sheila.

Marie S. Ballard, 91, entered into eternal rest on October 5, 2021, in Longview, Texas. Sheltered in her Lord&#8217;s arms now set free from the ravages of pain and confusion, she was reunited with her best friend and beloved daughter, Sheila... View Obituary & Service Information

The family of Marie S. Ballard created this Life Tributes page to make it easy to share your memories.

Send flowers to the Ballard family.