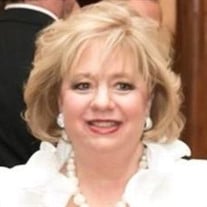 Lynne Bivins Simpson went to heaven on January 25, 2022, surrounded by her family. Lynne was born to James K. Bivins III and Maud Norton Bivins, on October 23, 1953, in Longview, Texas. She spent a wonderful childhood growing up with her grandparents, parents, and siblings, along with many lifelong childhood friends that she cherished. She graduated from Longview High School in 1971, where she was a not only a proud member of the Longview Viewettes, but she was voted Miss High Kick, and elected basketball sweetheart. Lynne graduated from Texas Christian University, with a Bachelor of Education, where she was a part of the Zeta Tau Alpha sorority and met many friends, she held dear. She began her early career as an insurance underwriter, following in her father’s footsteps. In 1977, she married the love of her life, Prentis Lamar Simpson Jr, who she met on the CB radio. She was blessed with three daughters Elizabeth, Baby Lynne, and Caroline. While raising her daughters, she served in many roles including, Parent Council President, Trinity School of Texas Board of Directors, Junior League of Longview, Southern Wood Garden Club, and many more. Once her girls were of school age, Lynne found true joy in her role as a first-grade teacher at Trinity School of Texas where she was a beloved teacher for 31 years and received the Deanne Buchanan award for excellence in teaching. She had many fond memories at the Dallas Caddo Club, Lake of the Pines, Mazatlan, Pinecrest, Cherokee Club, beach vacations with her family, and she had a special place in her heart for New Orleans. She loved to garden and to entertain friends and family. The door was always open to her children’s friends and earned her the name, “Mama Lynne,” as she was a second mom to many. One of her many joys in life, was hosting patio parties where she welcomed birthday club, Trinity teachers, Trinity Alumni, and a host of other friends. Her greatest joy was to spend time with her daughters and her grandkids. She is proceeded in death by her mother, father, and her brother Lee N. Bivins. She is survived by her husband, Prentis Lamar (Lamar) Simpson Jr., her daughter Elizabeth Simpson Woodard and her husband Scott of Dallas; her daughter Lynne Simpson Flippen and her husband Jody of Rockwall, and her daughter Caroline Simpson Wilson and her husband Dan of Richardson. Her precious grandchildren Eleanor, Amelia, Knox, Lauren, Lucy, Lainey, Jack, Allie Lynne, and Reid. She is also survived by her sister June Bivins Baumoel and her husband Jim of Dripping Springs, her aunt Peggy Bivins Reed and Cousin Rob of New Orleans, and her “aunt” Carolyn Russell of Longview. A Celebration of Life for Lynne will be held at 1:00 P.M. on Saturday, January 29th, at Trinity Episcopal Church 906 Padon St. Longview, Texas. If you wish, a donation may be made to Trinity School of Texas, 215 N Teague St, Longview, Texas, 75601 or a charity of your choice in her memory.

Lynne Bivins Simpson went to heaven on January 25, 2022, surrounded by her family. Lynne was born to James K. Bivins III and Maud Norton Bivins, on October 23, 1953, in Longview, Texas. She spent a wonderful childhood growing up with her grandparents,... View Obituary & Service Information

The family of Lynne Simpson created this Life Tributes page to make it easy to share your memories.

Send flowers to the Simpson family.