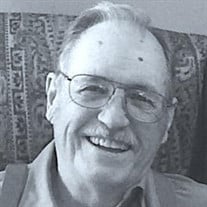 Louis Haden Kennedy, 93, much loved father, grandfather and great-grandfather walked peacefully into the arms of our Lord on Tuesday, September 7, in Longview, Texas. He was born in Nacogdoches on November 16, 1927 to Lucy and George Kennedy Sr., the oldest of three children. Louis attended Nacogdoches public schools, then joined the US Navy, serving in World War II, which took him to the South Pacific and China. While serving in the Navy, he learned to repair watches, which was an invaluable skill he later used while working in the family drug store busines, later to become a jewelry and gift store in downtown Nacogdoches. Louis and wife Lucille moved to Longview in 1952 and opened Kennedy’s Fine Jewelers. The downtown Longview business became a local icon, serving generations of customers for over 40 years. Louis served the community in various organizations, including Kiwanis, Knights of Pythias, his beloved church, and Longview Symphony’s Prelude. Louis was a devoted Christian and was a co-founder of Central Christian Church in 1965, later to become Longview Christian Church. Always quick to offer a story or witty quip, Louis had an infectious smile and laugh, and often kept friends and family entertained by telling tales of his antics as a youth. Louis was an avid outdoorsman and loved to camp and fish for weeks at a time with his buddies. Following their retirement in 1991, Louis and Lucille traveled extensively and enjoyed their grandchildren. Louis was known affectionately as “PawPaw” and later became “PowPow” to his great-grandson because of the sound his suspenders made when (repeatedly) stretched and released. He will be remembered for his irrepressible humor, his unerring sense of duty, his hospitable and generous spirit, and his quiet, extraordinary wisdom. Along with his wife, Louis is preceded in death by his brother George Ernest Kennedy, Jr. and sister, Lucy “Sissy” (Kennedy) Canter. He is survived by his son Kenneth Kennedy and wife Raye of Longview; granddaughter Lauren Kennedy Smith and husband Clayton of Fort Worth; grandson Stuart Kennedy of Paonia, Colorado, and great-grandson Walker Haden Smith. Memorial services will be held at Rosewood Park Cemetery Mausoleum on Monday, September 13 at 10:00 AM. A visitation opportunity will precede the service at the same location at 9:00 AM. Arrangements will be under the direction of Rader Funeral Home, with Troy Bayne of Longview Christian Church officiating. The family has requested that in lieu of flowers, contributions be made in memory of Louis to Longview Christian Church Building Fund, 2400 McCann Road, Longview, Texas 75605 or a charity of choice.

Louis Haden Kennedy, 93, much loved father, grandfather and great-grandfather walked peacefully into the arms of our Lord on Tuesday, September 7, in Longview, Texas. He was born in Nacogdoches on November 16, 1927 to Lucy and George Kennedy... View Obituary & Service Information

The family of Louis Kennedy created this Life Tributes page to make it easy to share your memories.

Send flowers to the Kennedy family.