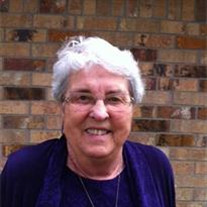 Lola Ruth Leeper Mapes, the oldest child of Merle and Ruth Leeper, was born in a farmhouse near Earlham, Iowa on August 29, 1931. She died November 29, 2011 at her residence and a celebration of her life will be held Saturday, December 3, 2011, at 10:30 AM in the Aldersgate United Methodist Church, Urbandale, Iowa. Burial will be in Penn Center Cemetery, Earlham, Iowa. When Lola started to Earlham Consolidated School in 1937, she met Franklyn Mapes, a kindergarten classmate, and fifteen years later on June 2, 1952, they married at the Penn Center Church near Earlham. Two sons, Gary and Craig, blessed their marriage. Lola graduated from Drake University and taught thirty-six years in both elementary and secondary schools. The final thirty years of her teaching career were at Clive Elementary School in West Des Moines. Lola also conducted numerous Writers" Workshops and Teacher In-Service Sessions in Iowa and Missouri Schools. Throughout her life, Lola was always involved in serving her church as a music and choir director and a Sunday School teacher. For the past 50 years and presently she is a member of Aldersgate United Methodist Church. The past few years Lola and Franklyn became snowbirds and divided their time between Urbandale and Texas – close to heir family. Preceding Lola in death were her parents. Survivors left with memories are Franklyn, her husband of 59 years, her son, Gary Mapes and wife Dee Ann of Longview, TX and son Craig Mapes of Arlington, TX. Grammalo leaves seven grandchildren and nine great grandchildren. Other survivors include her brother, Ross Leeper and wife Shirley of Indianola and her sister, Janet Jenkins and husband Rich of Hot Springs Village, Arkansas as well as many friends. In lieu of flowers the family request memorials to Aldersgate United Methodist Church, Des Moines, Iowa, Penn Center United Methodist Church, Earlham, Iowa or Heartsway Hospice, Longview, Texas

Lola Ruth Leeper Mapes, the oldest child of Merle and Ruth Leeper, was born in a farmhouse near Earlham, Iowa on August 29, 1931. She died November 29, 2011 at her residence and a celebration of her life will be held Saturday, December 3, 2011,... View Obituary & Service Information

The family of Lola Ruth Mapes created this Life Tributes page to make it easy to share your memories.

Send flowers to the Mapes family.