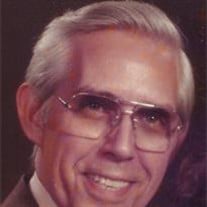 Surrounded by his wife and children, Leroy Eugene "Lee" Gillies, born June 6, 1924, in Madison, Kansas, went home to be with the Lord, Tuesday, August 21, 2012. Lee is survived by Beatrice "Bea" Gillies, his wife of 68 years; four children, Stephen Gillies, Carol Walker, Caryn Stimac, Patricia Vaughan, seven grandchildren, seven great-grandchildren, and two sisters, Virginia Lawson and Doris Houdek, both of Kansas. During World War II, Lee served in the Army Air Corps as a gunner on a B-29 Superfortress. While based on Saipan, Lee earned several honors, including the Distinguished Flying Cross, for his missions over Japan. In 1960, Lee moved his family to Longview to work at Cherokee Labroratories, Inc. In 1966, Lee became an account executive at E.F. Hutton. In 1971, Lee began his chamber career as the assistant general manager of the Longview Chamber of Commerce. In 1978, Lee was appointed as general manager and chief administrative assistant of the East Texas Chamber of Commerce where he served until his retirement in 1987. Lee is also remembered for his community service through the Longview Civitan Club and as the sponsor of the Jr. Civitans at Longview High School. A memorial service will be held in the chapel of Margaret's House, 5016 Gilmer Road in Longview, at 2pm, Saturday, August, 25th. In lieu of flowers, the family is requesting donations be made to Beacon Hospice at Margaret's House.

The family of Leroy Eugene Gillies created this Life Tributes page to make it easy to share your memories.

Surrounded by his wife and children, Leroy Eugene &quot;Lee&quot; Gillies,...

Send flowers to the Gillies family.