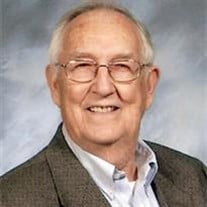 Services for Lehman C. Fowler, 86, of Brinkley, will be held at 2:00 p.m. on Saturday, February 26, 2011 at First Baptist Church, Brinkley, Arkansas, with Bro. Jim McDaniel officiating. Mr. Fowler died Sunday, February 20, 2011. Visitation will be at Fowler Funeral Home, Brinkley, on Friday, February 25, from 5p.m. to 7p.m. Lehman was born on February 1, 1925 in Ash Flat, Arkansas, to Mable and Merle Fowler. Following graduation from Ash Flat High School, he enrolled in the University of Arkansas in 1942. But the US had entered into WWII and in July, 1943, Lehman, at age 18, joined the US Navy, went through OCS to become an ensign, and trained as a bomb disposal officer. Before shipping off overseas, he married Virginia Elizabeth Holland in Washington, DC on March 24, 1945. Three months later, he was shipped overseas. Lehman was stationed in Hawaii, the Philippines, Japan and the Pacific Islands. Being a bomb disposal officer was one of the most dangerous assignments, second only to the Navy Seals. Lehman was a brave man who was proud to serve and protect his country. After the war ended, Lehman and Virginia moved to Fayetteville to continue his college education. He graduated in 1948 with a BS in Agriculture. Lehman started his career as Farm Manager for the R.E. Short farm near Moro, Arkansas. In 1957, he started farming on his own near Hunter, Arkansas. In 1962, Lehman moved his family to Brinkley. During this time, he was very active in the agricultural community. He served on the boards of directors of Riceland Foods, Arkansas Farm Bureau and the Agricultural Policy Institute at North Caroline State. He gave many technical presentations on a state and national level. He was named as a trustee to the Jewel Minnis Trust, a trust whose farm income makes it the largest contributor for University of Arkansas scholarships. Lehman also served as an advisor of USDA for Rice Science and Education and a viceâ?president of the Arkansas Economic Education Council. In 1970 Lehman was hired as crop division manager of Winrock Farms in Carlisle, Arkansas and Director of Western Operations near Dalhart, Texas. He was responsible for supervising over 39, 000 acres. He moved his family to Dalhart, Texas in 1972. He moved back to Brinkley in 1979 and developed Della Gourmet Rice. Lehman also has given back to his community and to humanity. He served as a deacon of First Baptist Church for over 30 years. He has traveled to Bangladesh, Haiti, Belize and India to aid the poor in crop production as a mission outreach. He worked as a volunteer for FEMA, as a cook for the Arkansas Baptist Men Disaster Relief who aided victims of Hurricane Rita, and traveled to Mexico and Turkmenistan with Winrock International to work with farmers. In 1997, he spent 12 days in Iraq studying agriculture and trying to sell rice in the "Oil for Food Program". Lehman was honored by being inducted into the Arkansas Agriculture Hall of Fame in 1996. He was preceded in death by his beloved wife of 55 years, Virginia Elizabeth, his parents and two brothers. Left to cherish his memory are his two sons and two daughters and their families, Ronnie and Sandra Fowler of McGehee, Arkansas, Rose and Curtis Blakely of Longview, Texas, Lisa and Lane Dykes of Ovilla, Texas and Reg and Brenda Fowler of Memphis, Tennessee; his eleven wonderful grandchildren and his fourteen fantastic greatâ?grandchildren; two brothers and three sisters. Of all his accomplishments, his greatest unselfish act was taking care of his wife, Virginia from the start of her illness in 1995 until her death in 2000. We will never forget that loving care. Lehman has been a friend to many. He was always willing to help. He has accomplished more in one lifetime than one could ever imagine. He has done it with integrity, honesty, hard work and faith in our Lord. In lieu of flowers, memorials may be sent to the Rebecca Fowler Kidney Transplant Fund, Rose Blakely, Treasurer, P. O. Box 9246, Longview, Texas 75608 or First Baptist Church, Brinkley, Arkansas.

The family of Lehman Cole Fowler created this Life Tributes page to make it easy to share your memories.

Send flowers to the Fowler family.