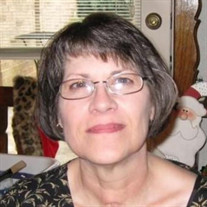 This is the day which the Lord hath made; we will rejoice and be glad in it. Psalms 118:24 Laura Lee Tibbs Scarlett was born on September 14, 1954, in Camden, Arkansas to William A. Tibbs and Clarice Byrd Tibbs, along with her twin sister, Leslie. In 1956, the Tibbs family moved to Longview, Texas. Elizabeth Ann was four, and in 1958, Art completed the Tibbs family. Laura was involved in church and school activities growing up, and then in high school she met the “love of her life”, Robert “Bobby” Scarlett. Bobby entered the Marines in 1973 and Bobby and Laura then married on April 10, 1973. The year they married, they were on their way home to Longview from Redstone Arsenal in Huntsville, Alabama and pulled up to a stoplight in Memphis, Tennessee. There sitting in the car next to them was Elvis Presley and Colonel Tom Parker! Wow, just wow! Laura and Bobby were then stationed at Camp Pendleton in Oceanside, California and that is where William Bradley Scarlett was born on April 15, 1974. The next move for Laura and Brad was to live with her Mother and Daddy while Bobby was stationed in Okinawa for 2 years. That was the last duty station and Longview then became their home. After settling back in Longview, Matthew Brian Scarlett was born on March 8, 1979, and their family was complete. Bobby had a masonry business until 1991 when the Scarlett family relocated to the Glen Hill horse farm in Ocala, Florida. Later, Bobby and Laura lived in Sacramento, California for a while and finally came back home to Longview. They celebrated “49 years” of marriage on April 10, 2022. Fourteen years ago, Laura had major medical issues and we almost lost her. She has struggled with her health since then. Bobby has been the ultimate caregiver and spouse. Last Wednesday, April 13, 2022, Jesus came knocking! Today, April 18, 2022, Laura Lee joined our Angels in Heaven! Laura is survived by her devoted husband, Robert “Bobby” Scarlett, her sons William Bradley Scarlett and wife, Tasha; Matthew Brian Scarlett and wife, Courtney; and her grandchildren, Dylan Scarlett, Preslie Dunnavant, Allie Frazier, Maverick Scarlett, Colton Scarlett, and Evie Claire Scarlett. Her surviving siblings are Elizabeth Ann LeBus, Art Tibbs, and Leslie Tutt. She is also survived by numerous nieces and nephews, cousins, and friends. Laura and Bobby were members of St. Matthews Catholic Church for many, many years. So, Laura Lee, do not eat all of Nanny Byrd’s apple pie! Save some for us! Memorial services will be 10:30 am, Saturday, April 30, 2022 at St. Matthews Catholic Church.

This is the day which the Lord hath made; we will rejoice and be glad in it. Psalms 118:24 Laura Lee Tibbs Scarlett was born on September 14, 1954, in Camden, Arkansas to William A. Tibbs and Clarice Byrd Tibbs, along with her twin sister,... View Obituary & Service Information

The family of Laura Tibbs Scarlett created this Life Tributes page to make it easy to share your memories.

This is the day which the Lord hath made; we will rejoice and...

Send flowers to the Scarlett family.