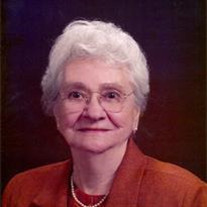 Laura Janelle "Nell" Watts went to be with her Lord and Savior on February 23, 2013, at the age of 93 years and 6 months. She lived in Longview for the past 52 years where she and her husband, James W. Watts, owned and operated the Dari Creme restaurant on South High Street. Mrs. Watts was born August 1, 1919. She grew up in Whitmire, South Carolina, a small textile mill town. Nell was the fifth of six children born to Leila Stockman Moore and John E. Moore. She worked in the textile mill until she met the love of her life, James Watts, who lived for a short time at her mother's boarding house. They were married October 15, 1938, and resided in Laurens, SC, where James worked as a supervisor in a textile mill. While there, Nell gave birth to their two children. In 1947, James and Nell moved their family to Rodessa, Louisiana, to go into the movie theater business. They owned and operated the Palace Theater and Wakea drive-in theater. In 1954, James and a business partner opened the first "rental" business in Shreveport, "Shreveport Rent-Alls." Leaving the movie theater business in 1956, he and Nell moved their family to Shreveport. In 1960 James had dreams of developing a marina in Queen City, Texas, where he and his wife purchased and operated a general store for a year. In 1961, they purchased the Dari Creme restaurant, on South High Street in Longview. James worked up front with customers and Nell managed the kitchen. Nell created many favorite recipes at the Dari Creme. Patrons especially loved her steak finger sauce and fruit cobbler recipes. They operated this business for 15 years until their retirement in 1976. During their retirement years, Nell volunteered her services to her church, First United Methodist Church of Longview. For more than 20 years, she led a group of ladies every Monday morning to clean up and reorganize the sanctuary pews. She was a talented member of the FUMC Quilter's Guild. She was also a faithful member of FUMC's prayer team. She loved being a member of the Thelma Morgan Women's Sunday School Class. Nell also loved going fishing with her husband, traveling in their RV, and spending time with her growing family. She was a regular early morning walker at the Longview Mall and had many friends. Nell was preceded in death by her husband in 1996 after 58 years of marriage; her parents; brothers, Curtis Moore, Grady Moore, Clarence Moore; sisters, Doris Grant, Ruth McMurtury; and three nephews. She is survived by her son and daughter-in-law, James W. Watts Jr. and Bettye Fogleman Watts of Longview; daughter and son-in-law, Barbara Watts Humphrey and Jimmy L. Humphrey of Austin; three granddaughters and their spouses, Kimberly Watts Beck and Gregory Beck of Coppell, Lynn Humphrey Andress and Bryan Andress of Canyon Lake, and Carol Watts Pope of Longview; seven great-grandchildren, Austin Beck, Trace Pope, Haley Beck, Matthew Andress, Elise Pope, Abbey Andress, and Will Pope. Numerous extended family members also survive her. The family offers special thanks to those who faithfully visited her and prayed for her. A private burial will be held for the family at Rosewood Cemetery on February 26, 2013. Friends are invited to attend a celebration of Nell's life at 2 p.m., on Sunday, March 3, 2013, at the First United Methodist Church, 400 N. Fredonia Street, Longview, Texas. Reverend Mike Schutz and Reverend Dr. Roy James will officiate at the service. The family will receive friends in the church Narthex following the service. In lieu of flowers, memorial contributions may be made to the First United Methodist Church or to your favorite charity. Condolences and special remembrances of Nell may be offered at www.raderfh.com.

Laura Janelle "Nell" Watts went to be with her Lord and Savior on February 23, 2013, at the age of 93 years and 6 months. She lived in Longview for the past 52 years where she and her husband, James W. Watts, owned and operated the Dari Creme... View Obituary & Service Information

The family of Laura Janelle "Nell" Watts created this Life Tributes page to make it easy to share your memories.

Laura Janelle &quot;Nell&quot; Watts went to be with her Lord and Savior...

Send flowers to the Watts family.