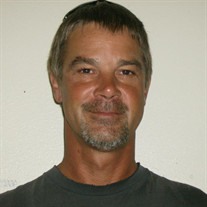 Memorial Service for Larry Walter Vance, 52, will be held at 4:00 p.m. Wednesday, March 23, 2022 at Rader Funeral Home of Longview, 1617 Judson Rd., Longview, TX. Visitation will be held from 3:00 p.m. until the time of the service. Officiating will be the Rev. Dr. Jim Freeman, Pastor of Broadmoor Presbyterian Church, Shreveport, LA. Larry Walter Vance was born on October 14, 1969, in Wheeling, West Virginia. On March 18, 2022, in Longview, TX, he went to be in God’s hands. He spent his first eight years in Philippi, West Virginia. He was baptized in the Philippi Presbyterian Church. In 1977, the family moved to Shreveport, Louisiana, where he attended Forest Hill Elementary, Ridgewood Middle, Southwood High, and Caddo Vocation-Technical Schools. He was a member of John Calvin Presbyterian Church. He worked in Texas for Baker Hughes Oil Co. and for the last seventeen years for Whitaker Plumbing Company, Carthage, TX, as a Licensed Plumber. He loved being outside and fishing. One of his high school friends said he had never known anyone who took a shower and washed his hair before going fishing. He enjoyed living just a block from the shore of Lake of the Pines. He loved his family, friends and co- workers and they loved him. Larry was proceeded in death by an infant brother, A. Arthur Vance, his grandparents, W.L. and Lois Coe and Marsaille Vance and his uncle, Pete McCall. He is survived by his wife, Tammy Vance; daughter, Aubrey Vance; sons, Clay and Evan Vance; sister and brother-in-law; Anna Kay and Todd Kidd; sister, Karen Joines; sister-in-law, Kim Bisese; niece, Shay Joines; nephews, Caleb Kidd, Bo, Logan and Cooper Joines; aunts and uncle, Judy McCall and Treva and Jim Gullette; his cousins and their families; Tammy’s aunt and uncle, Carol and Tim Skinner; Aubrey and Clay’s mom and step-dad, Mindy and Jake Cherry; numerous other friends and co-workers, along with special friends, Sheila and Kenny Clark and Julie and Kenneth Hinson. When Larry was four years old, we went to a track meet. His sisters, Anna Kay and Karen, were going to run. Larry wanted to run, too. They let him run, but he had to be in a group with 8-10 year old boys. He had to run one lap around the track. When he got about fifty yards from the finish line, he said to his Dad, “I’m really tired.” Art told him to just walk. He did for a short time; then, he started to run again and finished. All but two other boys had dropped out, and he got a white ribbon for third place. He never gave up. He ran a race with cancer and didn’t give up. In the last few days, his body was saying, “Mom, Dad, I’m really tired”, but he finished the race. He, like the Apostle Paul, can say, “I have run a good race and won the prize, which is God’s call through Christ Jesus to the life above.” Thanks be to God for giving Larry to us. We rejoice in his life! In lieu of flowers, memorials can be made to: Goodland Academy, P.O. Box 1056, Hugo, OK 74743; Broadmoor Presbyterian Church, 1915 Grover Pl, Shreveport, LA 71105; American Cancer Society; or a charity of your choice.

Memorial Service for Larry Walter Vance, 52, will be held at 4:00 p.m. Wednesday, March 23, 2022 at Rader Funeral Home of Longview, 1617 Judson Rd., Longview, TX. Visitation will be held from 3:00 p.m. until the time of the service. Officiating... View Obituary & Service Information

The family of Larry Walter Vance created this Life Tributes page to make it easy to share your memories.

Memorial Service for Larry Walter Vance, 52, will be held at...

Send flowers to the Vance family.