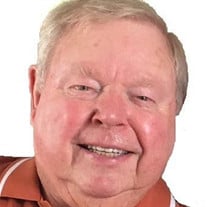 A memorial Service for Larry E. Sanders, of Longview, TX will be held at Rader Funeral Home in Longview on Wednesday, November 23, 2016, at Rader Funeral Home in Longview, TX. Larry was born to the late O.E. “Bud” & Virginia Sanders on May 15, 1936 in Sexton City, TX and died peacefully in his sleep Saturday, November 19, 2016. He attended London High School and was an all-around great athlete in high school, lettering in football, baseball, basketball and track and field. His love of sports followed him to college where he played on intramural teams. The picture of his winning intramural football team still hangs today at the University of Texas at Austin. He graduated from the University of Texas at Austin in 1958, with a degree in accounting and shortly thereafter passed the CPA exam. He maintained a CPA practice in Longview for 40+ years. He was also active in the oil and gas business for over 36 years. Larry was a Longhorn football season ticket holder and enjoyed going to the games. He was thrilled to see Texas win the National Championship in person at the 2006 Rose Bowl. He enjoyed spending time at his ranch where he raised Llewellin setters, Longhorn cattle (because he liked to look at them) and hosting East Texas Quail Hunters Association field trials with his bird-hunting buddies. His grandchildren loved going to the ranch and riding all the “toys”, fishing, playing with the dogs and going on “safari rides” in Poppy’s “huntin buggy”. Larry had a quick wit and will be remembered by family and friends as king of the one-liners. He was preceded in death by his stepson, Lee Spencer. He is survived by his wife of 39 years, Sharon, his brother Roland and wife Cel Sanders of Overton, TX, cousin, Sandy and wife “Button” Sands of Kilgore, TX, four daughters, Kim and husband Michael Peck of Plano, TX, Lisa and husband Dennis LeStrange of Malvern, PA, Sally and husband Tony Combs of Longview, TX and Jill and husband Jim Wolfe of Hallsville, TX, nine grandsons, one granddaughter, two great-grandsons and numerous cousins, nieces, nephews, and friends. He is also survived by his best friend of 52 years, Harry Vowell of Milano, TX. In lieu of flowers, the family requests that donations be made to the London Museum, PO Box 477, New London, TX 75682.

The family of Larry E. Sanders created this Life Tributes page to make it easy to share your memories.

A memorial Service for Larry E. Sanders, of Longview, TX will...

Send flowers to the Sanders family.