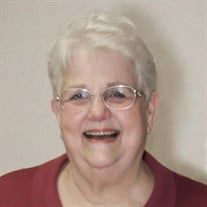 LaJuanda Welmaker Boyd Emery was born in Tyler, Texas on October 28, 1933. She passed away peacefully in the early morning hours on Thursday, June 24, 2021 at Autumn Leaves Nursing & Rehabilitation Center in Henderson, Texas where she had been temporarily for physical rehab. She accepted the Lord Jesus Christ as her Savior at age 15. Preceding her in death were her husband, John Edward Emery, her parents, Nolen Clark and Connie Parham Welmaker, grandparents, Thomas Monroe and Ida Pearl Jeffus Parham, Nolan Isaac and Claudie Mae Clark Welmaker, her brothers-in-law, Eddie Modisett and Eddie Strom, and her first husband and father of her children, William E. (Bill) Boyd. The Welmaker family moved from Tyler to Greggton (now Longview) in 1950, where her father was president of First State Bank of Greggton, now Austin Bank. LaJuanda attended Tyler schools in her early years and was in the top seven proud pirate graduates from Pine Tree High School in 1951. LaJuanda’s first job was as a clerk in the tax office at Pine Tree School, working for superintendent, James T. Ogg. She later worked at Gregg-Tex Refining Co., Powers Manufacturing Co., Garrett Oil Tools, and Sun Pipe Line Co., before her marriage to William E. Boyd in 1953. Her children, Bruce Edward and Bryan Eric Boyd, were born in 1956 and 1959, respectively. A move to Dallas in the early 1960’s led to a job at Wyandotte Chemical Co. This job provided valuable training in the chemical industry which was the foundation for her career in later years. After returning to Longview in 1970, LaJuanda began a 30-year career at Delta Solvents & Chemicals Co., now Brenntag Southwest. She worked in billing, transportation and served as purchasing agent for nine branches before retiring in January, 2000. Her experience at Delta was one of fulfillment, joy, and lasting friendships. In 1982, LaJuanda married John Edward Emery, and together they built a loving marriage that endured until his death in 2002. After Mr. Emery’s death, she served as a volunteer for Lifecare Hospice for two years and received a volunteer of the year award. For much of her life, Mrs. Emery was a member of Greggton United Methodist Church, where she taught Sunday School classes and sang in the chancel choir. She was a member of the Welmaker-Joy Class where her father had been a teacher for many years. As a GUMC member, Lajuanda served for seven years as executive secretary for Longview Interfaith Hospitality Network, a non-profit organization she helped to create that assists homeless families with children. In 2013, LaJuanda was blessed with an opportunity to move next door to her son, Bryan, his wife, Karen, and her precious granddaughter, Alaina Claire. She attended Laird Hill Baptist Church with her family during her later years and became a member in 2014. She treasured the many friends she made at Laird Hill and enjoyed being able to teach during Vacation Bible School and occasionally teach the Adult Sunday School class. In the final months of her life at the physical rehabilitation facility, she was honored to be asked to lead a Sunday morning devotion time for residents. She shared her Jesus proudly and believed in the adage “grow where you’re planted.” LaJuanda wasn’t your average senior adult. She tackled technology with determination and even began her own blog where she was able to share her thoughts and experiences. (lajuandasblog.com) The internet was her window to the world. Mrs. Emery loved all of her family and time spent with them was important to her. She is survived by her son Bruce Boyd and wife, Rhonda, son Bryan Boyd and wife, Karen, granddaughter, Alaina Claire, and her sister, Cherie Strom, all of Longview. She will be greatly missed by several nephews, nieces, cousins and other close friends and relatives that she loved and cherished. Lajuanda especially revered her sons’ paternal grandparents, Gene and Louise Boyd. There are so many special people who have been a part of her life and she was blessed to know each of them. A celebration of life memorial service will be planned for some time in July. In lieu of flowers, memorials may be made to Laird Hill Baptist Church Building Fund, P. O. Box 215, Laird Hill, Tx 75666, Greggton United Methodist Church, 1101 Pine Tree Road, Longview, Tx, 75604, or Longview Interfaith Hospitality Network, P. O Box 2732, Longview, Tx 75606. Arrangements by Rader Funeral Home in Longview, Texas.

LaJuanda Welmaker Boyd Emery was born in Tyler, Texas on October 28, 1933. She passed away peacefully in the early morning hours on Thursday, June 24, 2021 at Autumn Leaves Nursing & Rehabilitation Center in Henderson, Texas where she had been... View Obituary & Service Information

The family of LaJuanda Welmaker Boyd Emery created this Life Tributes page to make it easy to share your memories.

Send flowers to the Emery family.