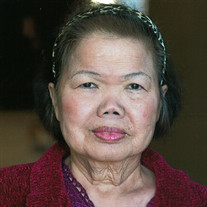 Kumsai “Penny” Cole Funeral services for Kumsai “Penny” Cole, 69, of Longview will be held at 2:00 p.m. Thursday, February 11, 2016, in the Chapel of Rader Funeral Home of Longview with Brother Roy Culley officiating. Visitation will be held from 6:00 to 8:00 p.m. Wednesday at the funeral home. She was born January 15, 1947 in Phrae, Thailand to Sook and Thoui Chada and passed away Sunday, February 7 at her residence in Longview. Penny was originally from Phrae, Thailand where she was born and lived her childhood. She met a Ruben Royce Cole while he was overseas in Bangkok, Thailand and they were married there. Together they had 3 children in Bangkok prior to Mr. Cole’s discharge from his service with the U.S. Army. They moved their young family back to the USA in 1970, and a year later had their final of 4 children. Penny was retired after 30 years as a production employee of Coils Plus/CP-Aaon in Longview. She was a member of Bethel Missionary Baptist Church. She was preceded in death by her former husband, Ruben Royce Cole; her parents; and 1 brother and 2 sisters. Those left to cherish her memory are her sons, Roy Wayne Cole and Jesse Ray Cole; daughters, Linda Cole Hebert and husband Bryan and Beverly Cole Iltis and husband Larry, all of Longview; 9 grandchildren and 5 great grandchildren; sister, Chankaeo Chada of Phrae, Thailand; and niece, June Nattha of Bangkok, Thailand; and several other siblings, nieces, nephews and other relatives in Thailand. In lieu of flowers, the family requests memorial contributions be made to Bancorp South, Kumsai Penny Cole Thailand Fund at 3120 H.G. Mosley Pkwy, Longview, TX 75605.

The family of Kumsai Penny Cole created this Life Tributes page to make it easy to share your memories.

Send flowers to the Cole family.