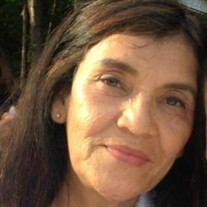 It’s with sorrowful regret that we announce the passing of Juana Rangel on September 14, 2021, at the age of 64 in Princeton, Texas. Juana will be dearly missed by her loved ones, who celebrate the fact that she’s at peace with her creator. Juana was born April 1st 1957 in Monterrey, Mexico to Berta Solis Rios. At a young age Juana was adopted by her grandmother, Tiburcia Serrano Solis, and moved to Lubbock, Texas. She graduated from Lubbock High School in 1976. She then met the love of her life, Oliverio Rangel. After a short courtship they married on August 19, 1976 in Lubbock, Texas. Juana was blessed with 3 children and 8 grandchildren in their 45 years of marriage, whom she greatly loved. Juana worked as a teacher’s aide for the Henderson ISD in Henderson, Texas for many years. Her legacy working with children has empowered countless children to grow to their full potential and be the best they can be. Juana was a devoted Christian, loving wife, and wonderful mother who greatly enjoyed spending time with her family and watching over her grandchildren. Her hobbies included sewing, needle point, crocheting, gardening, and spoiling her grandchildren at any opportunity. Juana was preceded in death by her mother, Berta Solis Rios; and grandmother, Tiburcia Serrano Solis. Juana is survived by her husband, Oliverio Mena Rangel of Henderson Texas; son, Melecio Raymond Rangel of Princeton, Texas; son, Ricardo Alberto Rangel and wife Giana Lee Rangel of Princeton Texas; daughter, Mayra and husband Leo Olague of Princeton Texas; grandsons, Miguel, Melecio Maxwell, and Nicholas; granddaughters, Arabelle, Elianna, Mia, Angelica, and Emilia; ,As well as her siblings, Jose Luis Solis, Jesus Solis, Luciano Solis, Marina Perkins and Mario Solis. And many nieces, nephews, family and friends. Funeral services for Juana Rangel will be on Friday, September 17 at 2 pm in the Chapel of Rader Funeral Home in Henderson. A burial will follow at Lakewood Memorial Cemetery.

It&#8217;s with sorrowful regret that we announce the passing of Juana Rangel on September 14, 2021, at the age of 64 in Princeton, Texas. Juana will be dearly missed by her loved ones, who celebrate the fact that she&#8217;s at peace with... View Obituary & Service Information

The family of Juana S. Rangel created this Life Tributes page to make it easy to share your memories.

It’s with sorrowful regret that we announce the passing of Juana...

Send flowers to the Rangel family.