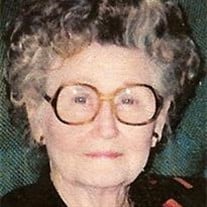 Joyce Yvonne Moorman Maynard went to be with her loving Savior on the 3rd of November 2008. She was 94 years of age. Graveside services will be held Wednesday November 5, 2008 at 10:30am at Rusk County Memorial Gardens with Rev. Bill Tisdale officiating. The family will be present to greet friends at the funeral home from 5-7pm Tuesday evening November 4, 2008. Services are under the direction of the Rader Funeral Home of Henderson. Joyce Yvonne Moorman Maynard was born March 27, 1914 to W.O. Oscar Moorman and Viva Page Moorman in Sour Lake, Texas. After graduating as Valedictorian from Hull-Daisetta High School in May 1933, she later married the love of her life Homer Taylor Maynard on June 5, 1937. Homer and Yvonne later moved from Port Arthur to Henderson, and adopted a son, Paul Taylor "Butch" Maynard in 1948. The family joined the First Baptist Church of Henderson on July 22, 1951. Yvonne lovingly cared for her husband, Homer during his long illness, as well as being a caregiver for many in her own family. She was affectionately known as a " second mom" to many. Not only did she have a husband, son, granddaughter and great- grandchildren that she called family, but she also had a very dear friend Irene Seelbach, whom she loved like her own sister. There were many people in the community who actually thought they were sisters. They loved to host many parties, dinners, and holidays together. Yvonne was a second mom to all of Stroud and Irene's children; Wayne Seelbach and CurtisShirley Seelbach and JanetRobert Williams. All of their children and grandchildren adored her and loved as their own grandmother and great-grandmother. They will greatly miss her affectionately teaching them manners and proper table etiquette. She was a shinning example of Christ's love not only to her family, but to friends and all who knew her. Besides Christ, her family and extended family were the love of her life. A special thank you to Janet for having a servant's heart and for being that special caregiver all these years. Yvonne took great interest in a variety of social activities that included the gardening club, sewing club, Order of the Eastern Star, and the Keenagers of the First Baptist Church to name a few. She had the gifts of hospitality and generosity and she loved to share those gifts with others. She will be most likely remembered for the elaborate parties that she loved to have in her home. Preceding her in death were her husband, Homer Taylor Maynard, parents W.O. "Oscar" Moorman and Viva Moorman, two brothers Woodrow Lynne Moorman and Gerald Moorman, one sister Erette Hoffpauir. Yvonne is survived by one son Paul Taylor "Butch" Maynard of San Antonio, one granddaughter Iris Thor Caristrom, of Jefferson, Iowa, and five great grandchildren, Rebecca Caristrom, Clive, IA, Victoria Hicks, Jefferson IA, PFC Alex Caristrom Fort Benning, GA, Alesha Hicks, Des Moines, IA, and Dalton Caristrom, Jefferson, IA, three sister-in-laws, and many nieces, nephews, and cousins. Honorary pallbearers will be Brent Johnson, Evan Walgama, Jon Walgama, Eric Seelbach, John Hicks, and Taylor Reynolds The family wishes to thank Dr. U.S. Walgama, the HMH fourth floor nurses and staff, and Odyssey Hospice staff for their loving care given during her illness

Joyce Yvonne Moorman Maynard went to be with her loving Savior on the 3rd of November 2008. She was 94 years of age. Graveside services will be held Wednesday November 5, 2008 at 10:30am at Rusk County Memorial Gardens with Rev. Bill Tisdale... View Obituary & Service Information

The family of Joyce Yvonne Maynard created this Life Tributes page to make it easy to share your memories.

Joyce Yvonne Moorman Maynard went to be with her loving Savior...

Send flowers to the Maynard family.