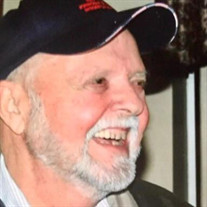 Joseph William Hart, Jr., a beloved husband, father, grandfather, uncle, coworker, surveyor, church Elder and devoted child of God died on September 12, 2021 at age 82, in Longview, Texas, surrounded at home by his loving family and dogs. Joe was in the Longview High School class of 1957. He played baseball at Panola Junior College, then attended the University of Texas in Austin. He served proudly in the U. S. Air Force from 1959-1963. He spent much of his life as a land surveyor, first working for his dad’s engineering company, Hart Engineering Co. in Longview. Later, he was elected Harrison County surveyor and formed Joe Hart Surveying Company (1976 to 1993) and had an office in the Harrison County courthouse. He then worked for Collins Surveying and Mapping from 1995-2005 and for Johnson-Pace Incorporated from 2005-2013—when he retired. Throughout his life, Joe became very proficient at many different hobbies and interests. He loved working on and fixing cars and motorcycles and improving their performance. He was also quite skilled at fixing small motors and electronics, even sometimes inventing devices for greater functionality. In his retirement years, he did many construction and improvement projects around his property, always working with excellence in mind. When he took up a hobby, he was all in! Whether it was golfing, fishing, archery, or even poker, he won many trophies to prove he meant business. However, the greatest trophies he earned won’t remain on a shelf; they are the kind that have eternal significance. His investment in loving people through his generosity and his big hugs, along with being a student of the Bible for many years, Joe lived out his beliefs as a quiet example to many. In 1966, Joe married Mary Jane Thornbury, a school teacher from Dallas, and they recently celebrated 55 years of marriage. Together they lovingly raised biological children and hosted dozens of foster children over the decades. Joe was born to Joseph William Hart, Sr. and Lena Rundell Hart on July 10th, 1939. He is predeceased by his parents and a sister, Patricia Ruth Chambers (husband, Robert). He is survived by a sister, Karen Breeding of Murfreesboro, TN, daughters, Traci Suzanne Hart (husband, Donny) Payne, Harriet Suzanne Stone (husband, Phil), and Alicia Dawn Yancey; sons, Joe W. Hart, III (wife, Judy), and Chris White (wife, Randa) and several nieces and nephews. Grandchildren left to cherish his memory are Casey Dylan Harper (wife, Bekah), Kaylee Grace Hart, Reagan Jaye Payne Tekell (husband, Grant), Rainey Camille Payne, Austin Riley White, Sadie Ruth White, Josh James White, and Chance Taylor Exley. Joe’s passing leaves a large hole in the lives of many who will miss him greatly. But especially in his last days, Joe made it clear that he was ready to go and be at home with Jesus whenever the call came—and his trust in God is a great comfort to those who mourn his passing from this life to being in the presence of his Savior. Visitation will be Friday, September 17, from 6-8 pm at Rader Funeral Home, 1617 Judson Rd, Longview, Texas. The funeral service will be Saturday, September 18, at 10 am, also at Rader’s facility. Memorial contributions can be made to HeartsWay Hospice, 4351 McCann Road, Longview, Texas, 75605, or New Journey CP Church, P.O. Box 2349, Longview, Texas, 75606.

The family of Joseph William Hart Jr. created this Life Tributes page to make it easy to share your memories.

Send flowers to the Hart family.