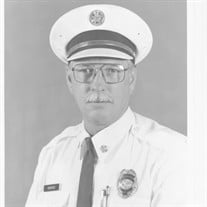 John W. Goodspeed, 82, of Henderson, Texas passed away unexpectedly on March 23, 2022. John was born on March 21, 1940 in North Creek, New York to Lillian (Robbins) and Garrold Goodspeed. John enlisted in the Navy when he was 17 years old attending boot camp in San Diego, California. After boot camp, John was stationed, his entire enlistment, at the Navy Base, National Parachute Test Range (NPTR) in El Centro, California working in the Fire Department. John developed a passion for firefighting making it his career. After his discharge from the Navy in 1961, John worked at the Calexico Fire Department until 1965 when he returned to the NPTR Fire Department. John rose through the ranks eventually becoming the Fire Chief, at the now named Naval Air Facility, and retiring in 1993. John married the love of his life Kay Miller on December 28, 1957 and they had three children, Garrold, Michael and Teresa. After living most of their lives in Imperial, California, John and Kay moved to Peoria, Arizona with Teresa and eventually to Henderson, Texas so the family could be closer together. John was an avid NASCAR race fan whose favorite driver was the late Dale Earnhardt. John passed his love of woodworking down to his three children who will forever treasure the time they had with their dad working on projects. John is predeceased by his parents and his sisters Ruth, Dorothy, Mary Lou and Sharon. John is survived by his wife of 64 years, Kay; Sons Garrold (Dolly); Michael (Dorina); Daughter Teresa (Larry Allen); Sister Robin (Doug Carpenter); 11 grandchildren; numerous great-grandchildren, nieces and nephews. Graveside services will be held at noon on Friday, April 1, 2022 at Rusk County Memorial Gardens 5013 US Hwy 259 N Henderson, Texas.

John W. Goodspeed, 82, of Henderson, Texas passed away unexpectedly on March 23, 2022. John was born on March 21, 1940 in North Creek, New York to Lillian (Robbins) and Garrold Goodspeed. John enlisted in the Navy when he was 17 years old attending... View Obituary & Service Information

The family of John Goodspeed created this Life Tributes page to make it easy to share your memories.

Send flowers to the Goodspeed family.