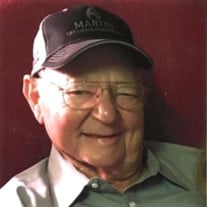 Joe Don Beard, age 87, passed away on March 18, 2021at his home, surrounded by loved ones, in Hallsville, Texas. He was born on March 29, 1933 in Winnsboro, Texas to Bena and Eva Beard. Joe Don grew up in Winnsboro, Texas. After high school he served four years in the United States Air Force. After Honorable Discharge from the United States Air Force, Joe Don began employment at Texas Eastman and worked there for 36 years. He enjoyed many years of raising cattle, farming, spending time in the woods with his chainsaw and riding on his tractor at his homestead in Hallsville, Texas. Joe Don had a love for Cracker Barrel and had it for dinner several times a week. His love of Cracker Barrel led to him purchasing stock in the restaurant. He was also an active member of the Board of Directors at Upshur Rural Electric Cooperative in Gilmer, Texas and of Valley View Baptist Church in Longview, Texas. Joe Don married Shirley Ann Kennemer in 1953 in Winnsboro, Texas. They were married for 48 years. They had two children, Pamela Jean and Kenneth Don. Shirley preceded Joe Don in death in 2001. Joe Don was also preceded in death by his parents, and brothers: Jim Bob, Chock, Rex, Ray and sister Kate. Joe Don is survived by his wife Margaret Beard of Hallsville, Texas; his daughter, Pamela Heard, her husband Ron, son Kenneth Beard, his wife, Janet, his grandchildren Clint Vail, his wife Jenni, Kasi Darragh, her husband Nick, Slade Beard and his wife Ginny, seven great-grandchildren: McKenna, Dawson, Zach, Madison, Ashton, Jake, Kinsley, many nieces and nephews and other relatives. Visitation will be held on Saturday, March 20, 2021 at 1:00 o’clock in the afternoon in the Chapel at Rader Funeral Home in Longview, Texas followed by a funeral service at 2:00pm. Grave side service will follow funeral at Hallsville Cemetery.

Joe Don Beard, age 87, passed away on March 18, 2021at his home, surrounded by loved ones, in Hallsville, Texas. He was born on March 29, 1933 in Winnsboro, Texas to Bena and Eva Beard. Joe Don grew up in Winnsboro, Texas. After high school... View Obituary & Service Information

The family of Joe Don Beard created this Life Tributes page to make it easy to share your memories.

Send flowers to the Beard family.