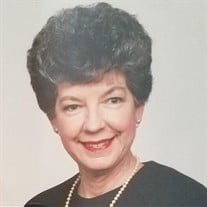 Jo Anne Tate Vermillion, 88, of Longview Texas, died on September 2, 2017 after a long struggle with Alzheimer’s disease. Visitation will be Tuesday, September 5, 2017 from 5:00 - 7:00 p.m. Services will be Wednesday, September 6, 2017 at 10:00 a.m. at Rader Funeral Home of Longview with Rev. David English officiating. Interment will be at Rosewood Park. Born in Atlanta, Georgia on February 13, 1929, she was the daughter of David Munroe Tate and Retha Florence Allen Tate. The family soon moved to Arkansas where Mrs. Vermillion grew up near the town of Lonoke. She received her bachelor’s degree in education in Arkadelphia, Arkansas from Ouachita Baptist University. While there she met Charles Ray Vermillion. Jo Anne and Charles were married on December 21, 1948 In the decades following, Jo Anne was a dedicated wife and mother as well as a teacher. She and Charles served in Baptist churches and schools in Arkansas, Oklahoma, Louisiana, and Texas. Five children were born of that union: Stephen, Retha, John, Joan, and James. She was preceded in death by her husband, her parents, and her brother, David Munroe Tate, Jr. As a mother, Mrs. Vermillion was devoted to her children and their spiritual growth. She kept them active in church activities, but also read to them often from the Bible and devotional literature. Scripture notes were not uncommon around the house. In 1986 her life was dramatically changed when her daughter, Retha, was in an accident. The rest of her working life was dedicated to the care of her severely injured daughter. When her mother and her husband began failing in health, she did her best to provide for each of them as well. She would not give up caring for Retha until her own health would no longer allow her. As well as being wife and mother, Mrs. Vermillion taught math in public and private schools in Ft. Worth, Hurst, Arlington, and Longview, Texas. She served her church homes by teaching Sunday School classes, singing in the church choir, and occasionally playing the piano. Mrs. Vermillion is survived by her son, Stephen Ray Vermillion and his wife, Kathy of Longview, her daughter, Retha Sue Vermillion Comer, of Longview, her son John David Vermillion and his wife Michele of Montgomery, Alabama, her daughter Joan Marie Ward and her husband Carey of Longview, her son James Garland Vermillion and his wife Laura of Longview, grandchildren Andrea Durbin, Adam Vermillion, Allyson Bock, Ashley du Feu, Allena Ward, Josh Nobile, Brianna Nobile, Timothy Nobile, Laura Vermillion, Carmen Vermillion, Joel Vermillion, and 7 great-grandchildren. The family requests that memorials may be made to: Alzheimer's Association P.O. Box 96011 Washington, D.C. 20090-6011 800.272.390 www.alz.org

The family of Jo Anne Tate Vermillion created this Life Tributes page to make it easy to share your memories.

Send flowers to the Vermillion family.