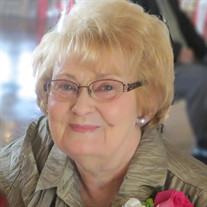 Jo Ann Wheeler Arthur, 84, passed away peacefully at home on June 7, 2021, after a brief illness. Jo was born April 22, 1937, to Hilton (“Rhodie”) and Dorothy (Ray) Wheeler in Gilmer (Glenwood), Texas. She graduated from East Mountain School where she was Salutatorian and Drum Major in the band. She spent her professional career working for Southwestern Bell Telephone in Longview in the Business Office, retiring after 30 years of service. Jo was blessed with her daughter Renee in 1958. She married Bob Arthur in 1974 and they spent happy years together until his passing in 2007. Jo enjoyed travel with trips all over the U.S. as well as cruises in the Caribbean and to Alaska. She was an accomplished china painting artist, selling her works at local stores and markets and providing beautiful gifts for family and friends. Jo enjoyed sports, especially watching the Dallas Cowboys and Texas Rangers. She loved collecting Santas and clown figurines. She was a gracious hostess in her beautifully decorated homes. She looked forward to her weekly get together with the “Lunch Bunch.” Jo is preceded in death by her parents Rhodie and Dorothy Wheeler, her husband, Bob Arthur, and her beloved niece, Whitney Aurora Wheeler, as well as pets, Angie, the dachshund, and Tigger, the cat. She is survived by her devoted daughter, Renee Drew, of Longview, and her brother, Larry Wheeler and wife Anita of Coppell, TX. She is also survived by her sister-in-law, Martha (R.E.) Josey, step-sons Gary (Kristi) Arthur and Frankie (Jennifer) Arthur, grandchildren Kayci (Rob) Walker, Hunter (Chasitee) Arthur, Kate Arthur and Jack Arthur and great-grandchildren Liam, Lincoln and Hensley. The family also thanks Jo’s long-time caregivers, Yasmin and Robert Hardin, who became family and yard and household helper, Billy McCrary, for their love, support and devotion. And, most recently, they are thankful for the care given by Elsie, Fernita, Eva, Dawn and Jessica. In lieu of flowers, the family asks that donations be made to Longview Animal Care & Adoption Center or to the charity of your choice. No public services are planned. A gathering for family and friends will be scheduled at a future date. A memorial guestbook may be signed online at www.raderfh.com.

The family of Jo Ann Arthur created this Life Tributes page to make it easy to share your memories.

Jo Ann Wheeler Arthur, 84, passed away peacefully at home on...

Send flowers to the Arthur family.