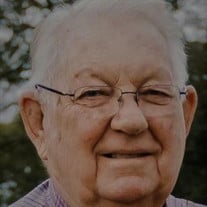 A family led memorial service for James (Jim) N. Warren Jr, 83, of Longview will be held on Saturday, November 20, 2021, at 1 pm at Mobberly Baptist Church. Visitation will be held immediately following the service. Jim passed away at home on November 3, 2021 surrounded by his wife and his three daughters. Private graveside services were held on November, 8, 2021 at Rosewood Cemetery. Jim was born on August 12, 1938 in Terrell, TX to James Warren and Hazel Sadler Warren. His family moved to Grand Prairie, Texas where he later graduated from Grand Prairie High School. He married his high school sweetheart, Janice Speck, and was married for 63 years. In 1959, Jim began his career with Southwestern Bell Telephone Co. as a lineman. He continued to be promoted to management levels throughout his tenure with the company. He and his family were transferred to Longview in 1970 where he made many friends of co-workers. One such friend, Jerry McKenzie, continued their friendship beyond retirement years. The family joined Mobberly Avenue Baptist Church where he served on several committees, but it was his volunteering in the kitchen on Wednesday nights cooking hamburgers that he and Janice made lifelong friends with several couples. This “Longview Bunch” has remained friends for over 40 years, generally getting together for dinner every month for several years. In 1987, AT&T transferred them to Tyler, TX where he ultimately retired after 38 years of service. Following retirement, he spent over 10 years as owner of Comtech, a commercial phone installation company. Immediately, when they moved to Tyler they joined Green Acres Baptist Church where Jim again was on several committees, sang in the adult choir and loved being a part of the Volunteer Christian Builders Association. He and Janice would travel with their RV to various locations help build the framework for small churches. Again, their friends grew in abundance and he thoroughly enjoyed spending time with all of them. Jim and Janice returned to Longview in 2013 to live near his kids, grandkids and great grandchildren. They returned to Mobberly Baptist Church and were very active in their small group. Throughout his life, Jim lived out his faith in Jesus through acts of service to neighbors, friends, coworkers, and family. He never met a stranger and believed in the importance of getting to know your neighbors and to being a good neighbor in return. He will be greatly missed by those that knew and loved him. Fortunately, we have the hope in knowing we will see him again. Jim exemplified, “Love thy neighbor as thyself. There is no commandment greater than these.” Mark 12:31 He is survived by his wife, Janice, and three daughters, Jamie & Brian Benson, Joni & Chris Bailey, and Jenni & Greg Godwin. Fondly remembered as “Dada” by his six grandchildren; Cody & Katie Bailey, Cooper & Meagan Bailey, Drew & Leanna Godwin, Lainey & Rhett Kruger, Taylor & Tanner Thompson, and Maci Benson, and six great- grandchildren, Hannah, Annie Kate, Ben and Emily Bailey and Harper and Lily Bailey and several nieces, nephews and cousins. In lieu of flowers, the family requests donations be made to Hope Road Counseling, a ministry of Mobberly Baptist Church.

A family led memorial service for James (Jim) N. Warren Jr, 83, of Longview will be held on Saturday, November 20, 2021, at 1 pm at Mobberly Baptist Church. Visitation will be held immediately following the service. Jim passed away at home on... View Obituary & Service Information

The family of Jim Warren created this Life Tributes page to make it easy to share your memories.

Send flowers to the Warren family.