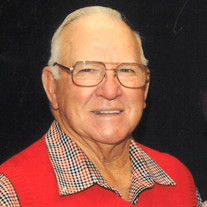 Jim M. Grimes passed away on July 29th at his home near Hallsville surrounded by family and loved ones. He was born on June 18, 1932 in Etoile, TX to Lee and Dollie Grimes. He graduated from Chireno High School in 1950. After high school, he earned an associates degree from Kilgore College and attended Stephen F. Austin State University where he met the love of his life, Jean Redmon Grimes who survives. They were married for 68 years. Growing up he excelled at baseball and played for a NY Yankees Farm Club as well as several semi-pro teams in the East Texas area. In 1953 he was drafted into the Army and was sent to Fort Bliss for basic training. After basic training he was one of 42 men selected for CADRE school graduating at the top of his class making the highest grade average ever at the CADRE course school. He was later stationed in Germany where he played on the Army baseball team. After discharge from the Army, he and Jean moved to Longview where he worked as a chemical operator for Texas Eastman for 33 years, retiring in 1989. He also opened the Gum Springs Trailer Park which he and Jean ran until selling it in 2000. He was a Deacon and Elder at Gum Springs Christian Church for many years. For the past 20 years, he has been a member of the First Baptist Church in Hallsville where he was a member of the Young at Heart Sunday School Class and the Fellowship Committee. He was also a member of the Hallsville Lions Club. For years he served as a youth baseball coach in Longview and Hallsville. He also enjoyed hunting and fishing with family and friends. He was an avid domino player and for many years belonged to a domino club in Longview. After retirement he enjoyed raising cattle and working in the hayfield and garden with Jean by his side. He was preceded in death by his parents, two sisters Dorothy Koontz and Catherine Kay, and two brothers Doug and Herman Grimes. He is survived by his wife Jean Redmon Grimes, three children: Jimmy Grimes (Amy), Carthage,MO, Mona Davis (Len), Round Rock, TX, and Barry Grimes (Teresa), Kilgore, TX. He is also survived by ten grandchildren: Megan Adams (Jimmy), Lauren Davis Johnson (Kyle), Savannah Cook (Will), Alexis Metz (Austin), Taylor Grimes, Isaac Grimes, Ariana Grimes, Elijah Grimes, Katie Pence, and Emily Pence. Also surviving are three great-grandchildren: Jenna and Violet Adams and Clarke Davis. Pallbearers will be Mac Soules, Luke Soules, Tucker Soules, Rufus Wiley, John Kent, and Pete Bretzman. Honorary pallbearers are Dick Wood, Doug Williams, Paul Kelsey, Franklin Smith, Danny Richards, and Tillmon Latham. Visitation will be held Sunday, August 1st from 5-7 pm at Rader Funeral Home, Longview, TX. Funeral services will be held on Monday, August 2nd at 2 pm at the First Baptist Church in Hallsville. Burial will follow at Gum Springs Cemetery. Memorial donations may be made to either First Baptist Church in Hallsville or to HeartsWay Hospice, Longview.

Jim M. Grimes passed away on July 29th at his home near Hallsville surrounded by family and loved ones. He was born on June 18, 1932 in Etoile, TX to Lee and Dollie Grimes. He graduated from Chireno High School in 1950. After high school, he... View Obituary & Service Information

The family of Jim M. Grimes created this Life Tributes page to make it easy to share your memories.

Jim M. Grimes passed away on July 29th at his home near Hallsville...

Send flowers to the Grimes family.