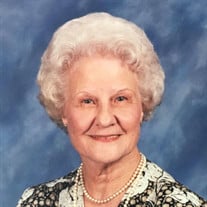 Jessie Mae Duke Wilson of Longview, Texas was born on November 12, 1923 in Gilmer, Texas. She passed away on July 10, 2020 at the age of 96. Her parents were James Hamilton Duke, a farmer and mill worker, and Izora Celester Loftis Duke, a homemaker, of Gilmer. James and Izora had ten children. Jessie was the second oldest. James passed way at a young age and Jessie often helped the family after his death. One of her brothers once said, “I don’t know what we would have done without her.” Jessie graduated Valedictorian from Union Hill High School in 1941. She was also a member of the Beta Sigma Phi sorority. She married Eulice Lavurle (Bill) Wilson on November 11, 1942. She and Bill lived in Texarkana, Texas and Dallas, Texas before finally settling in Longview in 1957. Jessie and Bill had two children – Janet Ann Wilson Hunt of Longview, Texas and Rodney Keith Wilson of Longview. Jessie worked for Longview National Bank, later to become Texas Commerce Bank, her entire career in Longview. She was active in the American Institute of Banking and she was Employee of the Year at Texas Commerce Bank in 1980. Jessie retired as Administrative Officer from the Bank in 1988. Jessie was a member of the First Methodist Church in Longview and a member of the Clyde Hall Sunday School class. She regularly attended church until it became too difficult to do so a few years ago but she enjoyed meeting with members of the church who would regularly drop by to talk and check on her. Jessie was proceeded in death by her parents, James and Izora, her husband Bill, brothers Wayne Duke of Gilmer, Lester Duke and wife Louise of Garland, Texas, and Wendell Duke of Gilmer, sisters Ruby Lee Weatherford and husband William of Pasadena, Texas, Ruth Culpepper and husband Robert of Channelview, Texas, Becky Jo Laney and husband Herbert of Gilmer, son-in-law Clyde Kenneth Hunt of Longview, brother-in-law Ray Warren of Winnsboro, Texas, along with several nieces and nephews. She is survived by her daughter and son, Janet and Rodney, granddaughters Cindy Karel Wilburn and husband Warren of Kilgore, Texas, Melissa Ann Johnson and husband Gregg of Kilgore, great-grandson Randell Wilburn of Kilgore, great-granddaughter Rebekah Johnson of Kilgore, and great-grandson Kenneth Johnson of Kilgore, brothers Kenneth Duke and wife Glynda of Gilmer, Larry Duke and wife Ruth of Gilmer, sister Dorothy Warren of Winnsboro, sisters-in-law Georgia Ann Duke and Connie Duke of Gilmer, and many nieces and nephews.

Jessie Mae Duke Wilson of Longview, Texas was born on November 12, 1923 in Gilmer, Texas. She passed away on July 10, 2020 at the age of 96. Her parents were James Hamilton Duke, a farmer and mill worker, and Izora Celester Loftis Duke, a homemaker,... View Obituary & Service Information

The family of Jessie Mae Wilson created this Life Tributes page to make it easy to share your memories.

Send flowers to the Wilson family.