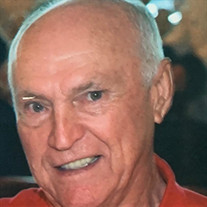 Jesse Thomas Cherry, age 94 of Longview, went home to his Heavenly Father on April 30, 2021. He was born October 26, 1926 in Union City, Oklahoma to James Wilson and Ola Belle Cherry. He was the second of four children. Tom was raised on a farm near Minco, OK and graduated from Minco High School. He served his country during World War II in the US Navy as a Radio Operator on a Destroyer in the Pacific Ocean and was responsible for all long distance communications, both voice and Morse code. Following his military service, he attended the University of Oklahoma and East Central University, where he earned a degree in Mathematics. Upon graduation, he began a 50 year career in the oil and gas industry. He met the love of his life, Norma Jean Masterson, while working in Anadarko, OK. Tom elected to take early retirement from ARCO Oil and Gas in 1986. He and his partners then founded 4-Sight Operating Company, Inc. An oil and gas production company. After purchasing his partners interest he led the company until he retired in 2003. He enjoyed traveling and loved taking his extended family on cruises around the world. His true legacy will always be the respectful manner in which he treated every person he met, his humble demeanor, and his generous spirit. He loved his Lord and was a long-time faithful member of Longview Church of Christ. Tom is survived by his loving wife of 68 years, Norma Jean Cherry; his son, Don Cherry of Maui; daughter Kay Cherry of Hallsville; son and wife, Keith and Darla Cherry of Longview; son and wife, Joe and Tina Cherry of Longview; five grandchildren, Ashley and her husband, Zach Walker; David Cherry, Kaitlin and her husband, Jack Booker; Thomas Cherry, a United States Marine; and Garrett Foster; plus many nieces and nephews and other relatives. Tom was preceded in death by his parents; three brothers, James Wilson Cherry, Billie Don Cherry and Virgil Lee Cherry. Private family services will be held at Rosewood Park under the direction of Rader Funeral Home.

Jesse Thomas Cherry, age 94 of Longview, went home to his Heavenly Father on April 30, 2021. He was born October 26, 1926 in Union City, Oklahoma to James Wilson and Ola Belle Cherry. He was the second of four children. Tom was raised on... View Obituary & Service Information

The family of Jesse Thomas "Tom" Cherry created this Life Tributes page to make it easy to share your memories.

Send flowers to the Cherry family.