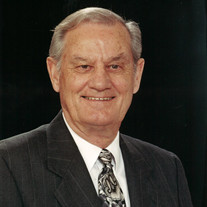 Jerry Alfred Forcher of Longview died Tuesday, October 25, 2016 at the age of 87 in his home in Longview, Texas after a six month battle with cancer. Jerry was born at home in Archer County, Texas on September 28, 1929 to George and Ruth Morrison Forcher. He was the youngest of nine children which included four half-brothers from his mother’s previous marriage, one half-brother and a half-sister from his father’s previous marriage and two brothers, although he never made those distinctions. He grew up on the family farm, where all the work was done with mules because his father did not know how to drive, until his father’s death when he was 12. He attended school in a one room school house, North Star school, but only received a sixth grade education until he enlisted in the army at the age of 17. While in the Army, he also earned his G.E.D. He served in the Army for seven and a half years where he reached the rank of Sergeant First Class. One of his favorite assignments was as driver and aide to a high ranking officer. He was stationed various places including the Philippines, Japan and Germany. In 1951, while stationed in Germany, he sent for and married Betty Rea Bumpus of Childress, Texas. He later married Barbara Minchew of Wichita Falls, and after her death, Elizabeth Stokes to whom he was still married at the time of his death. After getting out of the Army, Jerry had a long and varied work history which included but is not limited to 13 years with Gulf Coast Machine and Supply, 25 years as an Allstate Insurance agent in Vernon and Wichita Falls, Texas and 9 years running a fireworks business after his retirement. While an Allstate agent, he was recognized three times as being an outstanding salesman. After his discharge from the Army, Jerry returned to Wichita Falls where he learned to fly which became a lifelong passion. He owned several different planes through the years and was in the Civil Air Patrol and Pilots for Christ. He flew planes until the age of 83. He attended the big airshow in Oshkosh, Wisconsin several times, the last one being just last year. Flying and talking about flying and planes was a favorite pastime and he had many friends who are pilots. Another lifelong interest was traveling. He visited most, if not all, of the 50 states including Hawaii and Alaska and also traveled in Europe, Ireland and Israel. At the age of 84, he purchased a Spyder Can-Am motorcycle and he and wife Elizabeth took many trips on it prior to his diagnosis with lung cancer earlier this year. These trips included ones to Missouri, Tennessee and along the Texas coast. He had a genuine interest in people and made friends wherever he went. He was known for his sense of humor and love of a good story, joke or prank. His ordering “diet water” wherever he went was just one example of how he liked to engage people and strike a humorous note with them. He was also a Lifetime Mason and a 32nd degree Shriner. He was a member of the First Baptist Church of Judson and attended there regularly whenever he and Elizabeth weren’t traveling until he became too ill to attend. His constant companion during his illness was a miniature dachshund named Sweetie Pie that he called the “sweetest little ole dog” and she brought him much comfort and enjoyment. He was fond of saying that he had been “truly blessed” and it was evident in his joyful spirit, his love of life and the love of his numerous friends and family. Jerry is survived by his wife of 16 years, Elizabeth Stone Stokes Forcher, one son Jerry Forcher II and wife Jacqueline of Irving, Texas, one daughter September (Dee Dee) Whisenant and husband Billy of Sweetwater, Texas, stepsons Larry Stokes and wife Gayla of Longview and Derrell and wife Kim of Lenoir, North Carolina. He is also survived by grandchildren Ashley Adams and husband Marty of Colorado Springs, Colorado, Zachary Forcher and wife Natalie of Sugarland, Texas, Emily Ward and husband Steve of Argyle, Texas, William Whisenant and Nathan Whisenant both of Abilene, Texas, Ian Forcher of Irving, Texas, step grandson Shane Stokes and wife Janiece of Longview, Texas, step granddaughter Crystal Stokes of Longview, step grandson Tyler Stokes of Lenoir, North Carolina and step granddaughter, Maren Minchew of Austin. He is also survived by great grandchildren, Kayli, Mason and Riley Adams; Ethan, Elise, Liam and Elora Forcher,; Elijah Ward and step great grandchildren Colby and Claire Stokes. He is also survived by numerous nieces and nephews. Jerry loved them all the same whether they were by blood or by marriage and enjoyed seeing them as often as possible. Jerry was preceded in death by his parents George Forcher and Ruth Morrison Forcher, half-brothers Kramer, Harvey, Bobby and James Gray, half-brother Victor Forcher, half-sister Ferrell Joyce Schroeder, brothers G. J. and Randall Forcher, wives Betty Bumpus Forcher and Barbara Hudgins Minchew Forcher, stepsons Gary and Richard Minchew and stepson Ronald Stokes. Services are to be held at 10 a.m. on Saturday, October 29, 2016 at First Baptist Church of Judson with Pastor Tim Smith officiating. Family visitation will be 6 to 8 p.m., Friday, October 28, 2016 at the Rader Funeral Home in Longview. Pallbearers are Derek Forcher, Zachary Forcher, Don Bryant, Ben Chamness, Robert Keiffer, Tom Knapp, Jesse Loffer and Paul Palmer. We would like to thank Good Shepherd Home Health, Heart’s Way Hospice and caretakers Melba and Idalia for their compassionate care of Jerry during his illness as well all the members of his church especially Pastor Tim Smith who came to read and visit with Jerry almost every day. Memorials or donations may be made to Heart’s Way Hospice of Northeast Texas.

Jerry Alfred Forcher of Longview died Tuesday, October 25, 2016 at the age of 87 in his home in Longview, Texas after a six month battle with cancer. Jerry was born at home in Archer County, Texas on September 28, 1929 to George... View Obituary & Service Information

The family of Jerry Alfred Forcher created this Life Tributes page to make it easy to share your memories.

Send flowers to the Forcher family.