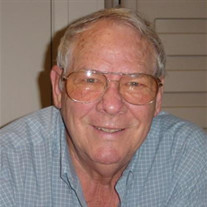 Jerry D. Dancer went to be with the Lord on Tuesday, December 6, 2016. A Celebration of Life Service will be held at 2:00 p.m. Saturday, December 10, in the Chapel of Rader Funeral Home of Longview. Mr. Dancer was born September 27, 1935, in Boswell, OK and grew up in Hugo, OK. In 1952, Jerry won District Championship in boxing in Ardmore, OK and went to Oklahoma City where he won the Golden Gloves State Title. He moved to Longview and worked for Eastman Kodak as an operator, supervisor and production assistant. He retired in 1993 after 40 year’s of service. Jerry enjoyed watching sports, fishing and hunting, especially his annual hunting trips to Colorado with family and friends. In Longview, Jerry coached Little League, Pony League and Dixie League baseball for many years. His team won the State championship in Dixie League and went to the Alabama World Series. He is preceded in death by his parents, Bradley and Irene Dancer; brother, Royce; sister, Robbie Baldwin; grandson, Chase Dancer; and his first wife, Alline Anderson. Those left to cherish his memory are his sweetheart, Della of 35 years; son, Jerry Howard and wife Victoria; daughter, Cathy Wilabay and husband David; step children, Donella Harrist, Don Harrist and wife Delores, Deborah Fernandes and husband Peter; 12 grandchildren, Kacey, Dustin, Taylor, Alexandra, and Sydney of Phoenix, Heather, Christina, Lance, and Luke of Tyler, Julia and Jay of El Paso, Christopher and Alex of Austin; 10 great grandchildren; brother, Roland of Longview; sister, Jan Higginbotham and husband Richard of Hugo, OK. Jerry loved life and will be greatly missed by his wife, children and everyone that knew and loved him. In lieu of flowers, contributions may be made to the Salvation Army Angel Tree Program, 519 E. Cotton St., Longview, TX 75601 or The Angel Tree www.salvationarmylongview.org or to the American Cancer Society, 1301 S. Broadway Ave., Tyler, TX 75701.

Jerry D. Dancer went to be with the Lord on Tuesday, December 6, 2016. A Celebration of Life Service will be held at 2:00 p.m. Saturday, December 10, in the Chapel of Rader Funeral Home of Longview. Mr. Dancer was born September 27, 1935, in... View Obituary & Service Information

The family of Jerry D. Dancer created this Life Tributes page to make it easy to share your memories.

Jerry D. Dancer went to be with the Lord on Tuesday, December...

Send flowers to the Dancer family.