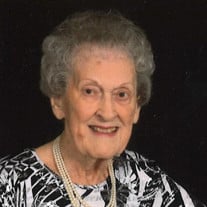 Jean Hall Lawson was born October 20, 1926 in Chattanooga, Tennessee. Because she trusted in Jesus as her Savior as a young girl, she transferred to Heaven on May 6, 2021. The service celebrating her life will be at Oakland Heights Baptist Church at 12 Noon Tuesday, May 11. Visitation will be one hour prior at 11 AM. Rev. Kevin Bright and Pastor Michael Cook will officiate. Jeanie, as Dad called her, met David Lawson at Central High School in Chattanooga and they were married on February 5, 1945. For 71 years they worked together building a life and rearing three children, moving to Longview in 1964. She continued her education at Stephen F. Austin where she earned a BA and MA in education. She enjoyed 18 years of teaching English and American History at Pine Tree Schools from 1968 to 1986. Growing up during WWII, learning to live with ration cards and conserving for “the war effort,” she was always very patriotic with a true love for America. She also had a lifelong love for baseball and was a huge fan of her beloved Texas Rangers. Mom was a faithful wife, mother, and grandmother. Along with her husband, she was a member of Oakland Heights for over 55 years. During that time, she was actively involved in various areas of the church – teaching, WMU, and WMU Reading Group. She had a heart for missions. She was preceded in death by her husband David M. Lawson in 2016, parents Herman and Foreste Hall, sister Margaret Harris and brother Bill Hall. She is survived by her children: Cathey (Steve) Hare, David (Peggy) Lawson, and Rodney Lawson; grandchildren: Paul, Joel, Andrew, Matthew and Alexandra Lawson; great-grandchildren Ashton, Paeton, Keirstyn, Hayden, Josephine, Kennedy, Noah and Levi Lawson. With much appreciation, we want to thank the staff of Heart to Heart Hospice who lovingly cared for mom in the last 3 weeks: Christy Black, Alesha, Staci and LaShonda; each of whom are truly ministers of love and compassion.

Jean Hall Lawson was born October 20, 1926 in Chattanooga, Tennessee. Because she trusted in Jesus as her Savior as a young girl, she transferred to Heaven on May 6, 2021. The service celebrating her life will be at Oakland Heights Baptist... View Obituary & Service Information

The family of Jean Hall Lawson created this Life Tributes page to make it easy to share your memories.

Send flowers to the Lawson family.