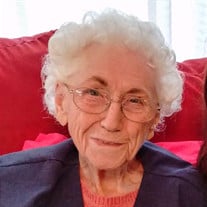 Jean Howard, 98, of Henderson went home to be with our Heavenly Father on February 2, 2021. Jean was born 10 miles North of The Little Brown Church in The Vale on September 3, 1922 just outside of Carrville City Iowa in Floyd County to Harold & Ada Emerson. Graveside services will be 2 pm Monday, February 8, 2021at Lakewood Memorial Gardens with open viewing on Sunday, February 7, 2021 from 12 - 6 pm at Rader Funeral Home in Henderson and again on Monday from 8 am till 12 pm. Jean moved with her family from Iowa to settle in Texas, where she graduated from Tyler High School, then went to work for the Postal Telegraph office in Kilgore TX. While she was working there, she met Paul Howard, after courting for eight months they were married. Jean was one of the founding members of Westminster Bible church where she taught Sunday school to numerous children over many years. Jean was also an auxiliary member of the Gideons organization, they would hand out and place Bible's in prisons and hospitals. Jean and Paul owned and operated Dependable Auto Parts (known today as DAPCO). She maintained all day-to-day bookkeeping and handled several other office duties for over 40 years. Their business allowed her and Paul to travel all over the country. Jean loved her family very much, she had 3 children, 6 grandchildren and 11 GG'S as Jean called her great grandchildren. Anytime they would come for visit before saying goodbye she would say "Come get in my lap" no matter how big or small you were, you could not leave before giving her a BIG hug while sitting in her lap. Jean lived a full and wonderful life, she set such a great example for her family, and all that knew her, of how to be a follower and disciple of The Lord. We can all rest assure that Jean is now in the arms of her Savior Jesus Christ. Jean was preceded in death by her husband of 61 years Paul Howard; parents Harold and Ada Emerson; brothers Damon and Allen Emerson; daughter Crystal Little; granddaughter Rebekah Howard. Jean is survived by her sons Mark Howard and wife Pam, Raymond Howard, and wife Barbara all of Henderson. Grandchildren Phillip Howard, Kirk Howard and wife Kelli, Debbie Materne and husband Chris, George Little and wife Karen, Rachel James, and husband Billy. Great-Grandchildren Luke, Sally, Dottie, Tyler, Maddie, Jackson, Cole, Heidi, Cannon, Brianna, Haley.

Jean Howard, 98, of Henderson went home to be with our Heavenly Father on February 2, 2021. Jean was born 10 miles North of The Little Brown Church in The Vale on September 3, 1922 just outside of Carrville City Iowa in Floyd County to Harold... View Obituary & Service Information

The family of Jean Howard created this Life Tributes page to make it easy to share your memories.

Jean Howard, 98, of Henderson went home to be with our Heavenly...

Send flowers to the Howard family.