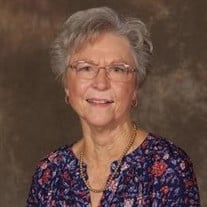 Jean Ann Furrh, 82, of Edmond, Oklahoma, formerly of Longview, Texas, peacefully passed away Monday, October 14, 2019 at Mercy Hospital, Oklahoma City, Oklahoma. A Celebration of Life Service will be Saturday, October 26, 2019 in the First United Methodist Church Nicholson Chapel at 1:00 pm. Pastor Jay Jackson will officiate. Visitation will be Friday, October 25, 2019 from 2:00 pm until 5:30 pm at Rader Funeral Home. Memorials Contributions may be made to Concordia Life Care Community Attn: Staff Developement 7707 W. Britton Road Oklahoma City, Oklahoma 73132 Jean Ann was born on December 21, 1936 in Marshall, Texas to Victor Annis and Mary Jo Logan. She was raised in Marshall, Texas and attended Marshall High School. On December 22, 1953 she married the love of her life, Billy Furrh in Kilgore, Texas. They resided in Fort Riley, Kansas during Billy’s Military Service. After his discharge they returned to East Texas to Marshall for a short time before moving to Longview to build their family & future. Jean Ann worked at Reliable Motor Supply before becoming employed by the Longview Public School System first as a Librarian at Bramlette Elementary and then moving to the Athletic Department to work as a secretary to the Athletic Director until her retirement in 1997. Following her retirement she began working part-time selling football tickets for her beloved Longview Lobos. She continued to sell tickets until her health prevented her from continuing on December 13, 2017 and officially retired at that time. For the past two years she has resided with her son and daughter-in-law in Oklahoma who have been her daily caregivers. Jean Ann was preceded in death by her husband, Billy Furrh, her parents, Victor Annis and Mary Jo Logan, sisters, Cara Mae Ferchill and Martha Sue Holden and her son-in-law, Steve Foster. She is survived by her Daughter, Debbie Foster of League City, Texas and son and daughter-in-law, Chris and Mary Jane Furrh of Edmond, Oklahoma. Granddaughter Ashley Foster, grandson Brandon Foster and partner Casey Capps, all of New Orleans, Louisiana, granddaughter Whitney Dobson and husband Rob of Houston, Texas, grandson Logan Furrh and wife Courtney of Yuma, Arizona and granddaughter Abby Furrh of Dallas, Texas. Her biggest blessing were her great grandchildren, great grandsons, Theodore and Grant Dobson and great granddaughter Ayden Furrh.

The family of Jean Ann Furrh created this Life Tributes page to make it easy to share your memories.

Send flowers to the Furrh family.