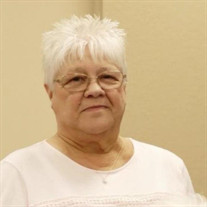 JANET ANN WILSON HUNT Graveside services for Janet Ann Wilson Hunt will be held Friday, January 15, 2021 at Sunset Memorial Park in Gilmer, TX with Brother Keith Wilkerson officiating. She passed away Saturday, January 9, 2021 in Longview, TX. Janet was born October, 9, 1948 in Texarkana, Arkansas to E.L. (Bill) and Jessie Wilson. She was a 1966 graduate of Longview High School. Throughout her life Janet lived in Dallas as a child, but spent most of her life as a resident of Longview. She married Clyde (Ken) Hunt, Jr. May 25, 1976. Janet was a past Worth Matron of Ashland Chapter Order of the Eastern Star, which later consolidated with the Gilmer Chapter. She had several hobbies including reading, cross stitch and journaling, but her favorite pastime was spending time with her grandkids. She was preceded in death by her parents, husband, along with several aunts, uncles and cousins. Left to cherish her memory are her daughters Cindy, and husband Warren, Wilburn of Kilgore, and Melissa, and husband Gregg, o f Kilgore; brother Rodney Wilson, of Longview; grandchildren Randell Wilburn of Kilgore, Rebekah Johnson of Kilgore, and Kenneth Alan “KJ” Johnson of Kilgore, and many aunts, uncles and cousins. If desired, donations may be made in her memory to the Scottish Rite Hospital for Children in Dallas, TX.

The family of Janet Ann Hunt created this Life Tributes page to make it easy to share your memories.

Send flowers to the Hunt family.