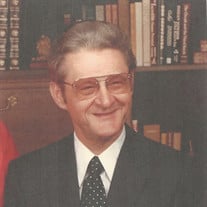 James L. Webber James L. Webber, a beloved husband, father, grandfather and great grandfather, went home to be with his Lord and Savior Jesus Christ on March 14th, 2016 surrounded by his children and grandchildren. He was 87 years old. The testimony of his life, his love for the gospel of Christ and his service to the Lord will never be forgotten by his family and friends. He was born July 29th, 1928 to James H. and Ola Webber in Little Rock, Arkansas. He graduated from Little Rock High School in 1945 and from the University of Arkansas in 1950. He remained a very avid and vocal Razorback fan all of his life and instilled that love for the Razorbacks in his children and grandchildren. He later served his country honorably with his military service in Korea in 1951-1952. After coming home from the service, he surrendered to the gospel ministry. He was ordained as a Baptist minister in 1954 and pastored churches in East Texas and Oklahoma for the last 62 years. He was the founding pastor of Faith Baptist Church here in Longview in 1976 and continued to serve there as associate pastor until his death. He loved his Lord, the doctrines of God's sovereign grace and the people of God. Up until the very last days of his life, he would passionately sit down with other believers and talk with them about the truths of God's Word. He will be missed by all who knew him, but especially his church family will miss his passion and love for the Lord. He is survived by his wife of over 60 years, Sylvia Sue Webber; his children David Webber and his wife Mary; Tim Webber and his wife Dina; and Tina Perkins and her husband Warren. He is also survived by his grandchildren Crystal Welch and her husband T. J. Welch; Suzannah Perkins; Micah Perkins and his wife Julia Perkins; Leah Everett and her husband Mason Everett; and Lee Webber, Rachel Webber and Hannah Webber. He was very blessed to have six great grandchildren: Jackson, Easton and Greyson Welch; Madison and Cooper Everett, and Kolbi Perkins. He was greatly loved by all of his family and we will miss him dearly. There will be a visitation on Thursday, March 17, 2016, from 6:00 to 8:00 p.m. at Rader Funeral Home, Longview and a Celebration of Life on Friday, March 18, at 10:00 a.m. in the Chapel of Rader Funeral Home. Entombment will follow in Rosewood Park Mausoleum. If you would like to like to give a donation in lieu of flowers, please give to the missionary fund of Faith Baptist Church, 4640 E. Loop 281, Longview, TX 75602.

James L. Webber James L. Webber, a beloved husband, father, grandfather and great grandfather, went home to be with his Lord and Savior Jesus Christ on March 14th, 2016 surrounded by his children and grandchildren. He was 87 years old. The... View Obituary & Service Information

The family of James L. Webber created this Life Tributes page to make it easy to share your memories.

Send flowers to the Webber family.