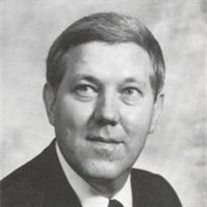 A Memorial Service for former Rusk County Judge James Berry Porter of Henderson will be held at 10:30 on July 24, 2013, at First Presbyterian Church, Henderson, 311 South High at Fair Park. Visitation will be Tuesday, 6:30 to 8:00 at Rader Funeral Home. The Reverend Candice Klein, pastor, will officiate the Celebration of Life Service. A family graveside service will be held in Oakhill Methodist cemetery under the direction of Rader Funeral Home. James Berry Porter was born in Henderson on July 7, 1941, and died on July 21, 2013, at the age of 72. He was preceded in death by his parents, James Russell and Pauline Porter. James is survived by his wife, Kathy Maloney Porter, two daughters and their families: Heather Porter Bradshaw and Cogdell Bradshaw of Houston, and their children Connor, Emily, and Jack; and Erin Porter Decuir and Brian Decuir of Friendswood, and their children Braden and Brodie. Other family members are his sisters:Nell Porter Compton, Kilgore, Clara Porter Gibson and husband Garland, Henderson; brother Robert Porter and wife Rhonda; mother-in-law Dorothy Maloney and brother-in-law Mike Maloney, all of Henderson, and several nieces and nephews. The Porters have deep roots in Rusk County that reach back several generations.James was the next to youngest of four children, and the oldest boy. James attended school in Henderson all 12 years. He was elected president of his class every year in high school and graduated with honors in 1959. He attended Kilgore College, and then Baylor University, receiving a bachelor's degree in history and political science and graduating magna cum laude. He moved on to the University of Texas law school getting his law degree so he could pursue his dream of being a public servant. During his professional career, he worked with Texaco, Inc., was in private practice, and served as guest lecturer in South Texas School of law in Houston. After returning home to his roots, he taught at the Police Academy at Kilgore College. From 1972 to 1975, James began his years of public service asMunicipal Judge of the city of Henderson. From 1975 to 1985, James served in the elected office of County Judge of Rusk County, where he presided over the Commisioner's Court, served as Juvenile judge, probate judge and heard misdemeanor cases. In 1985 heserved as County Court of Law judge overseeing the areas of family and probate law, misdemeanor, civil and juvenile cases.As a judge, he heard thousands of cases which included over 1000 contested hearings before the bench or before juries. He continued his public service with Lone Star Legal Services in Tyler, retiring in 2004. He was also a faithful servant of his church, First Presbyterian Church of Henderson. He served as Elder and Trustee. He served the larger Church as moderator of the Presbytery of the Covenant, the highest office any layman or minister can be named. In addition to the Texas Bar, James was a member of the Rusk County Chamber of Commerce, a board member of the East Texas Council of Governments, a member of the Texas College of Probate Judges, the Texas Association of Counties, the Texas Good Roads Association. He was awarded the distinction of "Road Hand" by the Texas Department of Transportation. Faith, service, wisdom, and leadership were clear and visible all of his life. Pallbearers will be John Tieken, Tom Laney, Jimmy Chapman, Bill Boren, Dr. Billy Brown, and Jim Bob Porter. In lieu of flowers, memorials may be made to the First Presbyterian Church, Henderson, 311 South High, 75654.

A Memorial Service for former Rusk County Judge James Berry Porter of Henderson will be held at 10:30 on July 24, 2013, at First Presbyterian Church, Henderson, 311 South High at Fair Park. Visitation will be Tuesday, 6:30 to 8:00 at Rader Funeral... View Obituary & Service Information

The family of James Porter created this Life Tributes page to make it easy to share your memories.

Send flowers to the Porter family.