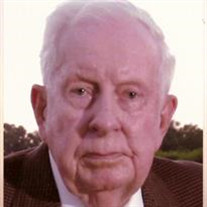 Funeral services for James Odell Poovey will be held 10 a.m. Tuesday, March 23 in the First Baptist Church sanctuary with Robert Hall officiating. Visitation will be from 5-7 p.m. Monday at Rader Funeral Home. Burial will be in Lakewood Memorial Cemetery. Odell was born December 23, 1920 in Zion Hill, near Brachfield, Texas. Son of Laura Rodgers Poovey and Arthur Augustus Poovey, he graduated from Minden High School then married his school sweetheart, Dana Tipps, and they enjoyed 68 years together before she died in March, 2008. Both were long-time members of First Baptist Church. His childhood during the Great Depression taught him responsibility and ambition. He was a member of Boy Scout Troup 320 and a Gold Star Member of the 4-H Club. One of the most memorable events in his life was winning a trip to Chicago in 1936 for his outstanding work with projects that included raising Jersey cattle, registered Duroc-Jersey hogs and Golden Prolific corn. It was 52 years before anyone in this area won the Chicago trip again. He started work for Warren Studio the day after graduation, but his employment was interrupted by World War II where he proudly served in the Pacific Theater as a combat photographer aboard the aircraft carrier USS Kadashan Bay and lived to tell about photographing a Japanese kamikaze plane hitting his carrier. For his service, he received five medals and three stars. After the war, he resumed his job at Warren Studio and purchased it five months later. During his 62-year career, he was the "first" at many things including owning the first set of electronic studio lights west of the Mississippi, first in the Texas to do "natural color" photography for which he won a trophy from Eastman Kodak for "Best Photograph in Natural Color." Also, he was one of the first three professionals in Texas to earn both the Master of Photography and Photographic Craftsman degrees from the Professional Photographers of America and one of the first 48 qualified print judges in the nation. He earned a total of 92 print merits, judged by a panel of his peers, during his career, and 3 of those images were part of the Traveling Loan Collection exhibited across the nation. Odell was also a well-known speaker throughout the U.S. and appeared on programs in 15 states. One of his favorite stories was when he received a standing ovation at the end of a lecture in New York by declaring, "I would rather be a photographer in Henderson Texas, than have a license to steal in New York City." He also served as president of the Texas Professional Photographers Association, the Southwestern Association, and three terms on the National Committee of the Professional Photographers of America. His Henderson studio was recognized by Eastman Kodak as having the "ideal studio layout for a modern studio." In 1980, he was presented the National Award from the Southwestern Association for his "meritorious contributions to professional photography" and later was inducted into the Professional Photographers Hall of Fame in Oklahoma City. With all these accomplishments, he was especially proud that for 62 years he never forgot or was late for an appointment. He had a full and meaningful life and believed that it makes no difference where you stand now. What counts is where you are going. He also served the citizens of Rusk County with two terms as a trustee for the Minden Independent School District and as mayor of Henderson from 1960 to 1965 before city managers were in charge. During this time, he and the city council changed the downtown square by moving the Thomas J. Rusk statue to the courthouse and installing red lights and off-street parking. He was preceded in death by his parents, wife Dana, sisters Annie Lawrence, Nig Johnston, Pauline Ham, and sisters-in-law Dawn Burgess and Evelyn Fitzgerald. He is survived by children Kay Nan Duran and husband John Lynn, Gay Allen, Jo Velvin and husband David, Jan Pirtle and husband Dwayne, and Don Poovey and wife Kelly, all of Henderson. Grandchildren include Clint Allen and wife Sarah of Houston, Dr. Adam Duran and wife Mandy of Carthage, Mandy Williams and husband Alan of Bryan, Justin Pirtle and wife Jennifer of Henderson, B.J. Poovey of Cotton Port, LA, and Eric Poovey and wife Alicia of Hastings, NE. Also surviving are 10 great-grandchildren and 10 nieces and nephews. Bill Hedrick, personal friend and colleague, was mentored by this master photographer and considered part of the family. Grandchildren will serve as pallbearers, and in lieu of flowers, memorials may be made to Henderson Interchurch Ministry, 108 N. Marshall St., Henderson, TX 75652.

Funeral services for James Odell Poovey will be held 10 a.m. Tuesday, March 23 in the First Baptist Church sanctuary with Robert Hall officiating. Visitation will be from 5-7 p.m. Monday at Rader Funeral Home. Burial will be in Lakewood Memorial... View Obituary & Service Information

The family of James Odell Poovey created this Life Tributes page to make it easy to share your memories.

Funeral services for James Odell Poovey will be held 10 a.m....

Send flowers to the Poovey family.