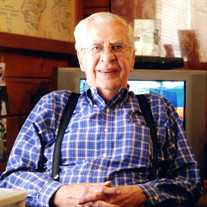 James Ellison Mauldin, Sr. passed away on November 23, 2021, at age 87 after an extended illness. He was born in a cabin in rural Marion County on March 30, 1934, to Jimmie and Ceedie Mauldin. James graduated from Jefferson High School in 1952, then attended East Texas Baptist College in Marshall, where he met his wife-to-be Martha Green. They married in 1954. After graduating from ETBC two years later, James next earned his Master’s degree in education at East Texas State College in Commerce, Texas. He taught sixth grade science at David Crockett Elementary School in Marshall then became Principal at Valley View Elementary School in Longview in the mid 1960’s. In 1971, James took over his father’s sawmill business near Smithland. In partnership with his uncle P.L. Mauldin, the mill produced rough-cut hardwood lumber and crossties. Known for the quality of their mill’s lumber products, Mauldin and Mauldin Lumber Company expanded to include a pallet board mill and continued in production until James’s retirement in 2011 at age 77. James was known by all for driving too fast (Thunderbird SC, Malibu SS). He was an outgoing character who hardly ever met a stranger. He doted on his grandchildren and prided himself on getting the desirable toy each Christmas that no one else could find. Preceded in death by his wife Martha in 2019, he is survived by his only sister, Shirley Chatham of Jefferson, sons Dr. James E Mauldin, Jr. and wife Maureen of Longview, Benjamin Mauldin and partner Tony Cutugno of Cross River, NY, Dr. Bruce Mauldin and husband David Jordan of Houston, TX, and grandchildren James Randall Mauldin, James Ryan Mauldin, Katie Hopkins and husband Jon, Patrick Mauldin and wife Savanna, Collin Mauldin, and Meghan Mauldin, and great-grandchildren Hannah, Rose, Benjamin, Joseph, and Violet Hopkins. The entire family wishes to express a sincere thanks to devoted caregivers Jeannie Broadnax, Theresa Nelson, Quita Mumphrey, Sharon Hall, and Kit Arnold. Visitation with family and friends will be held at Judson Cemetery on Saturday, Nov. 27 at 10:00am, followed by a graveside eulogy at 11:00am.

James Ellison Mauldin, Sr. passed away on November 23, 2021, at age 87 after an extended illness. He was born in a cabin in rural Marion County on March 30, 1934, to Jimmie and Ceedie Mauldin. James graduated from Jefferson High School in 1952,... View Obituary & Service Information

The family of James Ellison Mauldin Sr. created this Life Tributes page to make it easy to share your memories.

Send flowers to the Mauldin family.