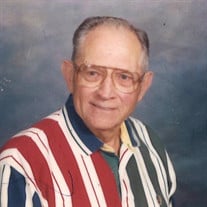 James Leslie Marshall died peacefully on April 21, 2018, surrounded by his family. He was born on September 16, 1918 in Ellis County, Texas. He was the youngest of 7 children and was a twin. A memorial service will be held on Tuesday at 1pm at First Presbyterian Church of Longview. A visitation will be held at Rader Funeral Home on Monday from 5-7 pm. He was a veteran of WWII where he served in the U.S. Navy as a member of the Sea-Bees. He was also in the Texas National Guard serving with the 72nd Infantry division and with the 56th Calvary Division. After high school, he began his employment with the Texas and Pacific Railroad as a carpenter’s apprentice, building railroad coaches, and later transitioned to other Foreman and Supervisor positions. He retired in 1975 after 38 years of employment. He was a member of the Presbyterian Church where he served as an Elder. He was also a member of the Masonic Lodge and Scottish Rite. He love gardening, hunting, fishing and painting. He was preceded in death by Mary, his wife of 57 years and by Margaret, his wife of 3 years. He is survived by his daughter Helen Bruyere of Longview, his son Jim, and wife Lou of Hartsville, TN, step-daughter Diane Hendrix and husband Jimmy of Houston, TX. Five grandchildren David Bruyere and Suzanne Bruyere, both of Longview, Doug Bruyere and wife Susie of Frisco, TX, Trey Marshall and wife Laura and Josh Marshall and wife Molly, both of Nashville, TN, and 4 great-grandchildren Hunt and Berkley Bruyere, Rachel Marshall and Gavin Marshall. The family would like to express our gratitude to Heart to Heart Hospice, especially Cassie and Brandi. In lieu of flowers, please send memorials to First Presbyterian Church, 301 N. Center St Longview, TX, 75601.

James Leslie Marshall died peacefully on April 21, 2018, surrounded by his family. He was born on September 16, 1918 in Ellis County, Texas. He was the youngest of 7 children and was a twin. A memorial service will be held on Tuesday at 1pm... View Obituary & Service Information

The family of James Leslie Marshall created this Life Tributes page to make it easy to share your memories.

Send flowers to the Marshall family.