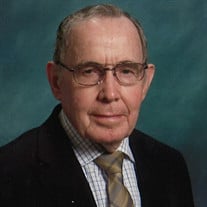 LTC James (Jim) Lawson, USA, Ret., age 90, entered his heavenly home at 11:30pm Sunday, December 22, 2019 at Summer Meadows in Longview. Visitation will be on Sunday, Dec. 29 from 4:00-5:30 pm at Rader Funeral Home in Longview. The Celebration of Life will be Monday, Dec. 30 at 11:00am at Rader Funeral Home. Jim was born on May 6, 1929 in Chattanooga, Tenn to Ovie Nelson and Carrie Owen Lawson. He grew up on a farm in Ringgold Georgia and graduated from the University of Georgia at the age of 20. His first job after graduation was as a county soil conservation officer. He then joined the Army and retired in 1975 after serving in Germany, Japan, Vietnam, Turkey, Korea and many bases throughout the United States. During his service he was awarded several medals, including the Bronze Star. He moved to Longview to lead the Junior ROTC at Longview High School. From there he worked for Swepco as a right-a-way agent. He served as Asistant Principal at Ore City Elementary School and ended his teaching career at Hallsville High School. He loved playing golf and after retirement played often. He volunteered at Good Shepard Hospital for many years and for the Institute for Healthy Living twice a week. He was an active member of the First Baptist Church and served as director of the 40+ Singles Department for many years along with his wife. He also served in the second grade department for 15 years. He served on the 55+ Committee, helped plan monthly meetings and helped set up and serve at those luncheons. He was active in missions and went on many mission trips to Mexico. He is preceeded in death by his parents and his brother William. He is survived by his loving wife of 36 years , Peggy Rich Lawson, their five children: Jim Jr. (Debbie), Joan Gosen (Richard), Jeffrey (Kathy), John (Theresa) and Duff Wier (Amy), 18 grandchildren and 13 great-grandchildren. In lieu of flowers, the family would like you to consider a memorial gift to the Jim and Peggy Lawson Endowment Fund for Elementary Children at the First Baptist Church, 209 East South Street, Longview Tx., 75601.

The family of LTC James "Jim" Lawson created this Life Tributes page to make it easy to share your memories.

Send flowers to the Lawson family.