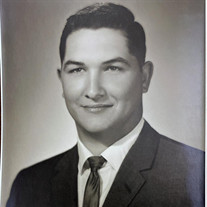 White Oak - James Edward King, 78, of White Oak passed away peacefully on June 24, 2021, in Longview, Texas. He was born in Palestine, Texas, on October 5, 1942, to parents Melvin and Dorleita King. James attended White Oak schools graduating in 1961, where he participated in football, basketball, baseball and track. Upon graduation from high school, he attended Rice University on an athletic scholarship and played football and baseball. He graduated in 1966 with a degree in kinesiology. He met Sue Carrington in kindergarten and they were married on April 17, 1965. They were married for 56 years. Mr. King worked at Texas Eastman for 10 years before founding K&K Construction in 1977. He retired in 2004 from John F. Clark Company as a district sales manager. James was active in the White Oak community serving as President of the Lions Club and was a member of the White Oak Education Foundation for many years. As a member of White Oak Baptist Church for over 60 years, he served as a deacon, youth sponsor, chairman of the building committee, member of the choir, and was a Sunday School teacher for junior boys. As a member of Longview Missionary Baptist Church, he was a faithful member of the Soul Winner’s Class. He was preceded in death by his parents Melvin and Dorleita King, brother Marvin King, and son-in-law Steve Minor. He is survived by his loving wife Sue King of White Oak, daughter Stephanie Hunter and husband Rodney of White Oak, daughter Laurie Beason and husband Joel of White Oak, son Brian King and wife Jacy of Nacogdoches, and brother Gene King and wife Betty of Longview, and six grandchildren: Clay Hunter and wife Shelby of Hallsville, Kayla Hunter of White Oak, Courtny Colvin and husband Mason of Longview, Savanna Beason of White Oak, and Trevin and Samuel King of Nacogdoches. They called him Papa. A private graveside service will be held at 9:30 am on Monday, June 28, at Memory Park in Longview. A public memorial service will be held the same day at 11:00 am at Rader Funeral Home with visitation beginning an hour earlier. The family would like to thank the staff at Summer Meadows and HeartsWay Hospice for their kind and diligent care for James. In lieu of flowers, the family has requested donations be made in memory of James King to Longview Missionary Baptist Church, 800 E. Loop 281, Longview, TX 75605, or to White Oak Education Foundation, P.O Box 797, White Oak, TX 75693.

The family of James King created this Life Tributes page to make it easy to share your memories.

Send flowers to the King family.