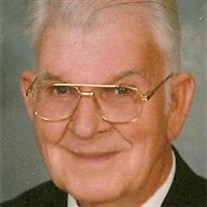 Funeral services for James R.Jim Taylor, of Henderson, will be held at 10:30 Tuesday February 1, 2011 in the Chapel of Rader Funeral Home in Henderson, with Rev Paul Clark, Rev. Kyle Ross and Dr. Ray Brooks officiating. He passed from the walk of this life on January 28, 2011 at the age 86 years 9 months and 18 days. His body will await the coming of the Lord at Waldrop Cemetery in Panola County. Jim was born in Rusk County on April 9, 1924 to Ed and Lucile Weaver Taylor. He received his schooling in the Chapman Community near his home. He served 3 years in the United States Marine Corps during World War II on the U.S.S. New Orleans as a sea-going Marine. He was discharged at Camp Pendleton on December 11, 1945. He returned to his home and married a lifetime neighbor, Charlcye Jones on January 1, 1947. Soon afterward Jim was saved and joined a local Baptist Church. He was baptized by Bro. G.D. Walters in the absence of the pastor Bro. R.E. Rodgers. After moving to Dallas, Jim continued serving the Lord at South Harwood Missionary Baptist Church. In 1951 Jim was called back into the Marines for active duty in the Korean Conflict. He was sent to Camp Pendleton for a short training session, then to the front lines in South and Central Korea. It was there during this time that he surrendered to the call to preach. After being discharged, he soon moved his family to Henderson and enrolled as a student at Texas Baptist Institute-Seminary. After attending T.B.I. he pastored the following churches over the course of 53 years in the ministry. Aiken Grove Baptist Church in Clarksville; Smyrna Baptist Church near Gould, AR, Calvary Baptist Church in Dumas, AR; Temple Baptist Church in Wichita, KS; Bethel Baptist Church near Tatum. His last pastorate was the County Line Baptist Church in Timpson, where he had a special love for the members. He served there for 35 years until his retirement in 2007 He was preceded in death by his parents and one brother Tom Taylor of Henderson. He is survived by his wife of 64 years Charlcye Taylor of Henderson. Three daughters: Connie Peveler & husband Tom of Henderson, Janie Clark & husband Paul of Hillsboro, and Patricia Appelbee & husband Steve of Madison, MS. Eight grandchildren Darby Warren & wife Suzanne, Christi Parker & husband Jason, Susie Littleton & husband Michael, Anastacia Maness & husband Scott, Jason Clark & wife Angie, Sarah Bachman & husband Justin, Jill Layne & husband Allen, and Justin Appelbee & wife Lauren. Fourteen great grandchildren, Emma, Anna and Lara Littleton: Joshua, Ruth, Hannah, Jonathan, and Elijah Maness; Lilia, Caleb, Micah, Andrew, Arianna Clark, and Alexis Layne. Pallbearers will be Justin Bachman, Michael Littleton, Scott Maness, Justin Appelbee, Jason Parker, Donald Jones, Bill Alexander, and Greg Owens The Family visitation will be from 5~7pm Monday at the Funeral Home. Memorial donations may be made to the Texas Baptist Institute, Seminary, P.O. Box 570, Henderson, Texas 75653.

Funeral services for James R.Jim Taylor, of Henderson, will be held at 10:30 Tuesday February 1, 2011 in the Chapel of Rader Funeral Home in Henderson, with Rev Paul Clark, Rev. Kyle Ross and Dr. Ray Brooks officiating. He passed from the walk... View Obituary & Service Information

The family of James Jim Taylor created this Life Tributes page to make it easy to share your memories.

Funeral services for James R.Jim Taylor, of Henderson, will be...

Send flowers to the Taylor family.