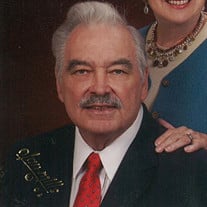 James “Jim” Vaughn Kennemer, 81, of Longview, TX, passed away peacefully on Tuesday, June 14, 2016, at Good Shepherd Medical Center. Born in Darco, TX, to Vernon and Jean Kennemer, he lived most of his life in Longview. He graduated from Pine Tree High School in 1953, attended Sul Ross State University, and then served in the US Army. Following his faithful service in the military, Jim married Betty Etheredge, in 1958. Jim was a well-respected and hard-working man. He worked for Texas Eastman for 41 years in several departments, including being a trusted safety inspector and training officer. He trained many fire fighters at Eastman, the North East Texas Fire School and the Texas A&M Fire School. He retired in 1997. Jim was a member of Oakland Heights Baptist Church and a member of the Masonic Lodge. He was an avid reader and loved watching John Wayne movies, the Green Bay Packers and playing Sudoku. Many will remember his intelligence, thoughtfulness, compassion and quick wit. Jim is survived by his wife, Betty, of 58 years, his two children, Jeff Kennemer and Angie Lobue, his son-in-law and daughter-in-law Mitchell Lobue and Amelia Kennemer; grandchildren Kara Holbert and her husband Blake, Kylie Kennemer, Josh Kennemer and Abby Lobue; great-grandchildren Holli, Hannah, and Harper Holbert and sister, Dorothy, of Arkansas; as well as many nieces, nephews, other relatives, and friends. He was preceded in death by his parents and his sister, Doris. The family will receive friends on Thursday, June 16, from 6-8pm at Rader Funeral Home in Longview TX. Graveside services will be held on Friday, June 17, at Rosewood Park at 10am.

James &#8220;Jim&#8221; Vaughn Kennemer, 81, of Longview, TX, passed away peacefully on Tuesday, June 14, 2016, at Good Shepherd Medical Center. Born in Darco, TX, to Vernon and Jean Kennemer, he lived most of his life in Longview.... View Obituary & Service Information

The family of James "Jim" Vaughn Kennemer created this Life Tributes page to make it easy to share your memories.

Send flowers to the Kennemer family.