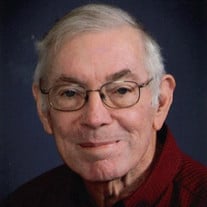 James Marvin Gray was born on March 15, 1938 and went to his be with the Lord on January 19, 2022 after a long battle with Dementia. He was preceded in death by his parents, William E. Gray and Iva Ruth Gray, his sisters Marion Jackson and Laura Estelle, and his grandson, Michael Gray. He leaves behind his wife Mary of 60 years, his daughter Stephanie Calbert and her husband Craig, his son Kevin Gray and his wife Murna, great granddaughter Angelina Gray, great grandson Michael Gray, his brother William Gray and his wife Pat and sisters, Beverly Keese, Sarah Hughes and her husband Jimbo, brother-in-law Jerry Watt and his wife Sandy, his best friend LeRoy Warfield, many nieces, nephews, cousins and his beloved cat Katarina. James graduated from Marshall High School in 1956 and then served in the Air Force Reserve from 1960 to 1966. James and Mary met at Thiokol where they both worked. He worked for Schlitz Brewing Company when it first opened in 1966 and Stroh’s Brewery for a combined 30 years when he retired. James was a member of Woodland Christian Church where he sang in the choir and was Chairman of the Board. He later was a member of First Christian Church where he also sang in the choir for many years. He was also involved with Bethany Home where he served as Administrator until his health prevented it. James and Mary enjoyed traveling with friends and family and saw many beautiful places with many wonderful memories. James was an avid bowler achieving a high series of 705. He played golf with his good friends and did make a “Hole in One” at Alpine Golf Course. He coached Little League baseball for many of the neighborhood boys. Funeral service will be at Rader Funeral Home on January 22, 2022 at 10am with the graveside service at the Tatum Cemetery. The family will receive visitors one hour before the funeral service. Pallbearers will be David Gray, Wade Hughes, Jimmy Hooper, Bob Calbert, Al McBride and Floyd Pepper. The family request that in lieu of flowers, memorial donations may be made to First Christian Church 720 N. Sixth St Longview, TX 75601 directed to the Choir or the Bethany Home. A memorial guestbook may be signed online at www.raderfh.com.

James Marvin Gray was born on March 15, 1938 and went to his be with the Lord on January 19, 2022 after a long battle with Dementia. He was preceded in death by his parents, William E. Gray and Iva Ruth Gray, his sisters Marion Jackson and Laura... View Obituary & Service Information

The family of James Gray created this Life Tributes page to make it easy to share your memories.

Send flowers to the Gray family.