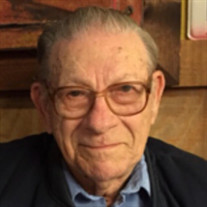 James (Buddy) Marvin Copeland, 91, of Henderson, Texas passed away on Tuesday, September 14th, 2021. He was born to the late Evera and Lois Pool Copeland of Henderson, Texas. James was an active member of the South Baptist Church who loved the Lord and his Church family. James was preceded in death by his wife, Jean, and brother Don Copeland. James is survived by four daughters, Donna Jean (V. Ray) Briggs of Henderson; Brenda Long of Fort Worth, TX; Gayle (Tim) Clanton of Kilgore; Teresa (late husband Tommy) Clay of Paris, TX. Grandchildren include, Jessi Holley, Steven Briggs, Kelli Briggs, Regina Darby, Jason Clay, Honorary grandchild Mallory Free, and one gran furbaby, Jax. With a total of 14 great grandchildren, numerous nieces, nephews and children that along with his wife Jean baby sat for years and considered their own. James was born in Trees, LA, with the family moving to Turnertown, TX. At an early age, as his father was an oilfield worker. James graduated from Gaston High School going to Kilgore College for a year, driving a school bus to help with expenses. James worked for Peterson’s Furniture of Henderson, and about the same time began his passion of working on washers and dryers. He later began working for the Henderson Daily News in the pressroom for 12 years, then moving to the Longview News Journal where he ran the presses on nights, being awarded “Employee of the Month” on several occasions, retiring after 28 years. All the while James continued to work on washers and dryers through out the communities around Henderson often times charging very little for his time to those who were in need. Around the age of 84 James gave up working on appliances with a vivid memory of his last call to an elderly lady in Minden, TX that told him she would pay him when she could. James said, “I kissed her on the cheek and told her, her bill was paid in full.” One of his past times was being a charter member of the Henderson Rescue Unit, with awards from the Henderson Rotary Club and Rusk County VFW numerous times over the years for his “High personal and official morals, Honesty, Church and Community involvement and dedication to the profession and Ideals of the rescue unit.” He also loved fishing and trot lining with his brother, Don and treasured the time they spent together. On James 90th birthday, a party was held with many friends, relatives, and members of the church. James said he considered that his celebration of life and with that, requested a small memorial service for him and his beloved wife Jean upon his passing, which will be held at a later date. A contribution to Hospices of East Texas may be made in lieu of flowers.

James (Buddy) Marvin Copeland, 91, of Henderson, Texas passed away on Tuesday, September 14th, 2021. He was born to the late Evera and Lois Pool Copeland of Henderson, Texas. James was an active member of the South Baptist Church who loved... View Obituary & Service Information

The family of James Copeland created this Life Tributes page to make it easy to share your memories.

Send flowers to the Copeland family.