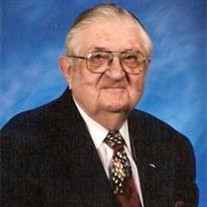 James Connor Henderson was born June 19, 1915 in Daingerfield, Texas to Edward C. and Pauline C. Henderson. He graduated from Daingerfield High School and attended Texas A & M University where he was a pitcher on the freshman baseball team. He married Jennie Lou Ford of Linden, Texas, on November 4, 1934. In 1937, after managing Henderson Mercantile in Linden, Texas for his Dad, he decided to follow in the footsteps of his Dad and Granddad and joined his Dad as co-owner of Consolidated Saw Mill & Lumber Company, Jefferson, Texas. They were partners in the lumber company until the death of his Dad in 1947. He later had two brothers who joined him in the lumber company after they completed their tour of duty in the military. In 1951, there was a shortage of timber in the area and he decided to close the lumber company and move to Longview, Texas, along with his wife and two sons. He bought and sold real estate for a short period of time before he decided to devote all of his time investing in the equities market. He continued to invest in the stock market until about four years ago, when his health began to fail. So, at the ripe ?ol age of 88 years old, he decided to retire. He died a peaceful death at home Thursday evening with his wife of 72 years and sons Jim and Ken at his bedside. James is survived by his wife, Jennie Lou Henderson and his two sons, Jim Henderson and wife Debby of Tyler, Texas, and Ken Henderson of Highland Village, Texas; a brother, Paul Henderson and wife, Rita of Broken Arrow, OK; his deceased brother, Edward Henderson?s widow, Peggy Henderson of Marshall, Texas; five grandchildren and six great grandchildren. Memorial services are scheduled for 12 noon Monday, October 1, 2007 at First United Methodist Church, Longview, Texas with Dr. Pat Sparks, Associate Pastors Jerry Turner and David Lindwall officiating. A reception for family members will immediately follow the memorial service. Private entombment services will precede the memorial services at Rosewood Park Mausoleum, Longview, Texas. Memorials may be made to Beacon Hospice, 1805 S. Mobberly, Longview, Texas, 75602, or First United Methodist Church, Longview, Texas. A memorial guestbook may be signed online at www.raderfh.com

James Connor Henderson was born June 19, 1915 in Daingerfield, Texas to Edward C. and Pauline C. Henderson. He graduated from Daingerfield High School and attended Texas A & M University where he was a pitcher on the freshman baseball team.... View Obituary & Service Information

The family of James Connor Henderson created this Life Tributes page to make it easy to share your memories.

Send flowers to the Henderson family.