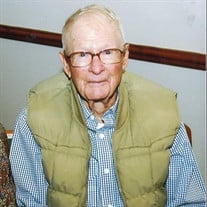 James Lewis Butler passed away on January 17, 2022, James (Red) was born October 20, 1929 to Ludie and Vernon Butler in Kaufman, Texas. His early childhood was spent in Dallas, Texas. He attended Kaufman High School thru the eleventh grade. He joined the Air Force at age 17 with the dream of working on aircraft. In 1950, he went to work for TEMCO in Greenville, Texas. He worked for TEMCO/LTV/E-Systems until he retired in 1989 from E-Systems in Greenville, S.C. During his retirement , he spent time fishing the local lakes. James was preceded in death by his parents, Ludie and Vernon Butler, two sisters, Dorothy Buford and Shirley Wages, and his son Michael Edward Butler. He is survived by his wife of 73 years, Anna Butler, a daughter, Mickey Faust, and a brother, Eugene Wesley Butler of Bakersfield, California, grandson, Christopher Butler of Simpsonville, S.C., 3 great-grandchildren in South Carolina, and several nephews. A memorial service will be at 2 pm, January 20 at Hallsville Methodist Church in Hallsville. Visitation will be from 1:30 pm to 2 pm.

The family of James Butler created this Life Tributes page to make it easy to share your memories.

Send flowers to the Butler family.