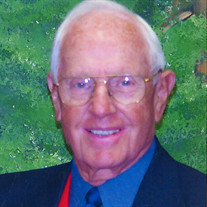 Ray Barber, 95, was born September 22, 1923 in Greenwood, Parker County, Texas to the late Winburn Lee and Mary Ann (Goodson) Barber. Ray and his twin brother Joe Ralph, and Siblings were raised in Greenwood and Weatherford, Parker County, Texas area. He died Saturday, February 16, 2019 in Longview, Gregg County, Texas. Growing up, twins Ralph and Ray Barber did just about everything together, whether it was school, football, or joining the air corps. In December 1944, he was assigned to the 446th Bomb Group of the 8th Air Force and sent to England. Ray and Ralph, twins were always stationed at the same bases and often mistaken for each other which they thought was humorous. They were never allowed to fly together during WWII, but they almost lost their lives when their separate planes were downed on the very same day. Ray was the Aerial Engineer/Gunner on a B-24 named “Lil’ Snooks” flying to Magdenburg, Germany. When enemy fire disabled the plane all had to parachute. On landing, he was surrounded by American soldiers who asked his name, and where he lived thinking he could be a German. On hearing Weatherford, Texas, they call the Cpl. Ray Hall, who was a classmate and high school friend. Hall looked at Ray and said “Hello James, nice of you to drop in.” he crewed 24 more missions. Ray loved visiting people and traveling. He graduated from Texas Tech in Lubbock and received a master’s degree from TCU in Fort Worth. He remained friends with many of his classmates. He attended or watched the football games. He was a Vocational Ag. Teacher, then principal, and became the Superintendent of Aledo ISD. Then, he was the Superintendent of the Fort Worth Masonic Home 1960-1964. He kept up with many of the kids after they left the home. Next, he moved to Austin, Texas to work with the Texas Education Agency. On September 1, 1967 he became the T.E.A. State Director of Occupational Research. He traveled throughout state to help set up vocational classes. After retiring, he came to Longview often to visit longtime friends, the Walters, and met Barbara Boddie Browning. Eventually, Ray and Barbara were married on June 26, 1999 in Greenwood Texas in the Greenwood Baptist Church. Even after moving from Austin to Longview, he and his wife, Barbara, continued to be active in Austin community activities. They were volunteer ushers at the Paramount Theater. One time they seated Lady Byrd Johnson and her family. He was a Master Mason for more than 67 years. He was active in the Phoenix Lodge #275, Weatherford; Hill City Lodge #144, Austin; and Pine Tree Lodge #1396, Longview. He was recognized by Carter Bloodcare for donating 65 gallons or 520 pints of blood in Austin and 64 gallons in Longview. He was a member of the First Baptist Church of Austin and of Oakland Heights Baptist Church in Longview. He loved playing golf and made a hole in one at the age of 75. He played often with Toby Abner, Eddie Gibson, Travis Parr and Everett Walters. They played at the Longview Country Club, Oak Forest, and Woodhollow and many others in the Longview area. At the age of 90, Ray and Ralph, who was his identical twin, traveled with the Freedom Honor Flight for WWII veterans to Washington D.C. Their chaperones were identical twins, Jenna Lee of Houston and Shenna Lee of Austin. Preceding him in death are his parents, twin brother, Joe Ralph; brothers W L “Bud” Jr., Bert, Henry and Harry; and sisters Marzelle and Mayme Ruth. Ray is survived by his wife of almost 20 years, Barbara; stepson, Gil Browning; stepdaughter, Karen Gober (Harold) also survived by brother, Rev. Billy Truett Barber of Henderson TN and many loving family and friends. The Barber family wants to thank all the caregivers who helped Ray. A graveside service for the family and friends will be held on Saturday, February 23 at 1pm in Greenwood Memorial Chapel in Greenwood TX near Weatherford/Mineral Wells TX. A visitation will be held from 12-1pm before the graveside, A viewing available at Rader Funeral Home in Longview in the afternoon of Friday, February 22. In lieu of flowers, memorial donations are requested to Honor Flight Austin, 815A Brazos St. UPS Box 498, Austin, TX 78701, in appreciation of the flight he and his twin brother were privileged to make together; or to the Joan Troy Barber Scholarship at Weatherford College Foundation, 225 College Park Dr. Weatherford TX 76086. A online register book can be signed online at www.raderfh.com/obituaries/James-Barber-10/.

The family of James Ray Barber created this Life Tributes page to make it easy to share your memories.

Send flowers to the Barber family.